High Court protection for newspaper due to expire next Friday 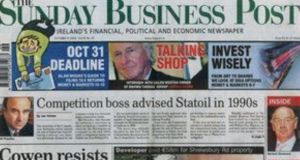 High Court protection for the Sunday Business Post, which was placed in examinership three months ago, is due to run out next Friday.

Up to eight potential buyers approached Mr McAteer over the last three months, but the field was narrowed down to just one bid, from Key Capital and Mr Cooke, today.

It is understood that the parties worked out the heads of agreement, the first step to drawing up a formal deal, early this morning and talks are continuing.

Mr McAteer, a partner with Grant Thornton, has to complete a rescue plan - known as a scheme of arrangement - today.

The Sunday Business Post was placed in examinership in early March after its parent, Thomas Crosbie Holdings, former owner of the Irish Examiner group, went into receivership.