Is Richard Bruton ready to chat with RTÉ about presenters’ salaries? 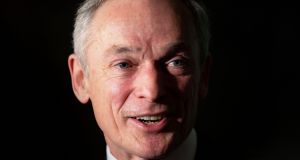 Newish Minister for Communications, Climate Action and Environment Richard Bruton is said to have spent recent months reading himself into his wide portfolio. He certainly had his notes ready when a Dáil session on his brief took a hard swerve from illegal dumping to the question of whether the best-paid RTÉ presenters are paid too much.

Bruton quoted RTÉ’s most recent figures, for the 10 highest-paid presenters in 2016, which he said showed “a reduction of 32 per cent compared to fees earned in 2008”. Indeed, they do. But that reduction, effectively a market correction on boom-time cheques, was actually banked more than five years ago.

The year 2016 saw the top 10 receive a combined pay bill that had swollen €74,000 on 2015. Most of the increase related to a €50,000 pay rise for Ray D’Arcy, the second highest-paid presenter, who had done a full year rather than half a year of the RTÉ television chat-fest that isn’t The Late Late Show. He earns €450,000 a year for this Saturday night programme plus an afternoon radio show that bridges the gap between Liveline and Drivetime.

RTÉ, as Bruton noted, argues that the top tier earn their salaries through their ability to generate advertising revenue, critical in these cash-starved times for media companies. It’s a problematic defence for a public service broadcaster. But if the principle is accepted, then it suddenly becomes relevant to point out that RTÉ’s commercial revenues have endured a somewhat steeper fall than presenters’ salaries, being 38 per cent lower at the last count than their 2007 peak.

Divorcing the magic skills of a presenter from the talent and hard work of their team also shouldn’t be as easy as all that: RTÉ’s “star” league has greater support behind the scenes than their peers doing equivalent on-air jobs for commercial broadcasters. And, as methods of sapping morale go, there is nothing more failsafe than wide pay gaps between those at the top and those at the bottom.

As Sinn Féin communications spokesman Brian Stanley said, the combined pay bill for just 10 presenters at RTÉ has once again crossed the €3 million mark. Bruton told Stanley that he would raise the matter with director-general Dee Forbes at their next meeting – a shame, then, that he didn’t sound massively enthusiastic about doing so.