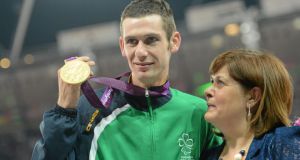 For Irish Paralympian Michael McKillop, it was a golden moment – he had just won the 1,500m at London 2012. But there was a surprise to come.

At the ceremony, it was Catherine McKillop, his mother, who walked out from the Olympic stadium tunnel to present him with his gold medal.

The emotional scene was all part of Procter & Gamble’s “Proud sponsor of Mums” campaign and, for orchestrating this element of it, FleishmanHillard’s Dublin office has won a Bronze Lion PR award at the Cannes Lions International Festival of Creativity.

The campaign, which won in the best use of sponsorship category, was led by FleishmanHillard Dublin director Gill Madden, along with creative director Brian Melarkey and client manager Ellen Ryan.

The Cannes Lions awards have been running for 60 years. Public relations categories were first introduced in 2009 and this is the first Cannes Lion PR award to be taken home by an Irish agency.