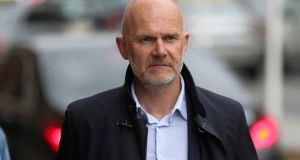 Mediahuis chief executive Gert Ysebaert, who said the comapny is open to considering a bid for the UK Telegraph group. Photograph: Nick Bradshaw

Belgian media group Mediahuis, the owner of Independent News and Media, has said it is potentially interested in buying the Telegraph newspapers from the Barclay brothers, a move that would reunite the titles with their former chief executive Murdoch Mac Lennan.

Although no formal discussions have taken place, Gert Ysebaert, chief executive, said he was looking for acquisitions.

1 Ciara Kelly: I was pregnant, unmarried, a junior doctor and I got old-school comments
2 Suspected murder-suicide shooting in Cork leaves father and two sons dead
3 Son (23) who died in suspected Cork murder-suicide was due to graduate
4 ‘Shellshocked’: Outrage in Australia after women on flight strip-searched in Qatar
5 Cork suspected murder-suicide may have been over disputed will
6 Cork farm shootings: A timeline
7 Two hundred Irish retailers for all your online Christmas shopping
8 Deaths of father and sons may have been over disputed inheritance
9 Covid-19 in a cramped inner-city flat: ‘It felt like the walls were closing in’
10 The Undoing: Hugh Grant is wonderfully inscrutable as he plays his greatest hits
11 Fintan O’Toole: Knock-knock joke on house parties is a Covid charade
12 PTSB plays down Ulster Bank talk as it sells €1.4bn of loans
13 Gerry Thornley: Antoine Dupont and France look perfectly primed for Ireland visit
14 Don McLean on the meaning of American Pie: ‘Who cares, who gives a f**k’
15 Irish tech company Asavie acquired by Nasdaq-listed Akamai
16 State will not appeal court decision to refuse Ian Bailey’s extradition to France
17 Am I crazy to consider switching to an Ulster Bank mortgage?
18 Covid-19: UK deaths pass 61,000 as Victoria state records no cases for second day in row
19 Up or down – how much is your Local Property Tax this year?
20 Almost 20% of staff at Dublin hospital have antibody evidence of Covid-19 infection
21 Gardaí say 52 people who went missing in 2020 not yet found
22 How much state pension will I get next year?
23 Tourists and renters to be permitted in student accommodation
24 Woman stranded in Ireland due to pandemic has ‘miracle baby’
25 Asian shares slip as surging Covid cases weigh on global economy
26 Ireland's centre will hold thanks to Henshaw and Aki’s midfield muscle memory
27 Seán O’Brien: Anger over my parents’ break-up never left me
28 Suzanne Lynch’s US Election Diary: Trump’s judicial legacy confirmed as Barrett reaches supreme court
29 The former Rose at the front line of US Covid-19 fight
30 From the past to modernity: images of Ireland transforming
31 Back to brack: An easy Halloween bake
32 Cannabis plan for State-owned bogs goes up in smoke
33 Third person arrested in education board corruption investigation
34 Brexit to curb services trade with UK, accountants group warns
35 Amy Coney Barrett sworn in as member of US supreme court
36 Pledge to ramp up processing of applications from undocumented migrants
37 Rory McIlroy’s sole focus is on Masters and another Grand Slam opportunity
38 France’s Teddy Thomas ruled out of Ireland clash
39 US election: Money makes electoral world go round as candidates spend big
40 Lessons of pandemic key as Ireland stands at crossroads
Real news has value SUBSCRIBE