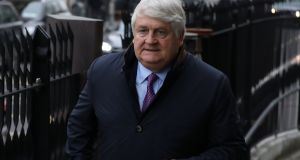 Denis O’Brien is suing Red Flag and a number of people who worked for it over the contents of a dossier which he says Red Flag prepared on him in an effort to injure his commercial and business interests. Photograph: Collins Courts

Businessman Denis O’Brien has been refused access to communications about him between journalists and politicians and the public relations company Red Flag Consulting by the High Court.

Ms Justice Miriam O’Regan said it would not be “appropriate” to grant Mr O’Brien’s discovery application for the documents and said it was “over-broad in the extreme”.

The High Court has, however, ordered the disclosure of certain documents which Mr O’Brien says he needs for his defamation and conspiracy action against Red Flag.

Mr O’Brien is suing Red Flag and a number of people who worked for it over the contents of a dossier which he says Red Flag prepared on him in an effort to injure his commercial and business interests. He is also suing businessman Declan Ganley who, Mr O’Brien believes, commissioned Red Flag to prepare the dossier. The defendants deny the claims.

Pending the trial, the O’Brien side sought information in the possession of Red Flag which he says shows hostility and ill-feeling by the defendants towards him. They also show there was a campaign of briefing of politicians and journalists with material adverse to his interests, Mr O’Brien claims.

Red Flag said the documentation sought was too vague and subjective and opposed the application.

Michael Cush SC, for Mr O’Brien, argued there was evidence to show hostility in texts which went between one of the Red Flag defendants, Karl Brophy, and former TD Colm Keaveney.

These texts related to asking Mr Keaveney to set up an allegedly clandestine meeting between former assistant secretary in the Department of Finance Neil Ryan and the then leader of the opposition, now Taoiseach, Micheál Martin.

It is claimed this meeting was to discuss Mr O’Brien’s private banking affairs, in particular in relation to his loans and the sale to him of utility services company Siteserv by the Irish Bank Resolution Corporation (IBRC), which Mr O’Brien says was overseen by Mr Ryan before it went into special liquidation.

Michael Collins SC, for Red Flag, said a plaintiff cannot make a bare assertion of wrongdoing and then seek to build a case on it on the basis of discovery of documents. Merely “pointing to a load of texts” which refer to Mr O’Brien’s affairs in general terms did not amount to particularisation of an assertion of wrongdoing, he said.

In her ruling, Ms Justice O’Regan said the main issue in contention was the discovery sought by Mr O’Brien in relation to certain categories of documents.

In relation to documents which showed ill feeling and hostility towards Mr O’Brien, she said they were within the gift of the O’Brien side to produce and did not require discovery.

In relation to documents connected to the alleged encouraging of disclosure of information by Mr Ryan, on the basis of communications between Mr Keaveney and Mr Brophy, the judge believed Mr O’Brien had made out a stateable claim and granted discovery of that category.

She limited the time period during which the discovery orders relate to from October 2014 to December 2015. She granted a stay on her orders pending a possible appeal.