Getting kids to watch RTÉ is far from child’s play 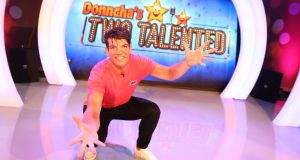 Can a new version of the RTÉ Player help the broadcaster become more popular with children?

The broadcaster’s commitment to the youngest generation of viewers – a notoriously tough audience to please – has looked doubtful of late. The feeling may be mutual.

“That is really not good, nor is it where a public service broadcaster should be,” RTÉ director-general Dee Forbes told the Oireachtas communications committee in October – the context, as ever, being RTÉ’s financial strains and “difficult choices”.

RTÉ’s “peer review” report, which it commissioned from the European Broadcasting Union, noted that most of RTÉ’s audience is over 45 and it has “a low reach” among children and young audiences.

As part of a wider recommendation to cut its total number of services (which RTÉ can’t act upon without Department of Communications approval), it suggests that RTÉ should pay greater recognition to the fact that children are on-demand natives, concentrate on digital platforms and “even assess the legitimacy of a television channel for children”.

That channel, RTÉjr, was only launched in 2013, when it was hailed by then minister for children and youth affairs Frances Fitzgerald as an innovative, wonderful initiative.

RTÉjr also exists as an app, but at the Oireachtas, Forbes said she hoped the upcoming new version of the main RTÉ Player would have “a significant role” in its mission to reach kids, as it will feature “a dedicated area for children”, with parental controls.

RTÉ says RTÉjr “remains part of RTÉ’s services”. But it is worth remembering that putting the RTÉjr channel to bed wouldn’t be such a big retreat when so many of its programmes also run on RTÉ2.

On November 30th, RTÉ1 will broadcast what is typically the most-watched programme on Irish television every year: The Late Late Toy Show is the kind of cultural phenomenon broadcasters in other countries envy.

But it’s a one-off. For RTÉ to properly compete with YouTube, Netflix and a panoply of kids’ channels , it will take more than pocket money.