Irish ‘Strictly’ is like Ed Balls attempting a lift - risky, but it just might be a must-watch 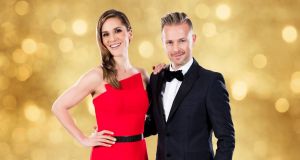 ‘Dancing with the Stars’ presenters Amanda Byram and Nicky Byrne. Can RTÉ replicate the glitz of ‘Strictly’ on its version of the BBC format?

This weekend marks the arrival of a global television phenomenon on Irish screens as an international entertainment behemoth makes its debut. But enough about The Voice on TV3.

Prepare the scoring paddles, pop in the tanning booth and pickle your walnuts: Dancing with the Stars is here from Sunday at 6.30pm to make us laugh, cringe and get weirdly agitated about sticky-out bottoms.

So why is it all terribly important stuff to RTÉ?

1. It’s braver than a rumba in a body stocking

When RTÉ first announced in August last year that it would be bringing DWTS to air in 2017, it was as surprising as a ten from Craig Revel Horwood. (Translation: Very surprising.)

The DWTS format may have been licensed by the BBC to more than 50 countries already, but viewers in those countries haven’t been exposed to the original Strictly Come Dancing for as many as 14 series now. The BBC really is the best at this stuff, and Strictly doesn’t just have sky-high, glitzy production values, its sky-high, glitzy production values are the whole point.

So the pressure is on RTÉ and production company Shinawil to avoid a situation where the Irish DWTS looks like a cheap copy. Instead, it will have to manufacture a charm and appeal all of its own.

DWTS, through the range of its casting, is attempting something similar, with sports broadcaster Des Cahill and Teresa “no unnecessary journeys” Mannion the most obvious examples of contestants who will lock down the older demographic. Presumably ex-Operation Transformation contributor Dr Eva Orsmond has her fans too.

3. The slot usually gets fabulous ratings

DWTS will take up a two-hour chunk of RTÉ One’s schedule on Sundays – a night of the week when RTÉ has historically wiped the floor with the competition (although admittedly there hasn’t been much).

Immediate slot predecessor The Voice of Ireland, also made by Shinawil, comfortably attracted average audiences of more than 500,000 throughout most of its successful five-year run, and only really started to soften up last year.

This makes RTÉ’s decision to “refresh” of its entertainment output now a very interesting contrast to the attitude of ITV to The X Factor, which is seemingly set to continue on with its gladiatorial warbling format until the very last viewer has switched off.

4. It could be a commercial beast

The €450,000 understood to have been paid by Renault Ireland to sponsor the show (that was the price on the package, anyway) is not nothing, even allowing for the fact that car companies seem to have money to burn on marketing.

RTÉ should be able to buy a few glitterballs for the office now, while for its money, Renault will also get its brand all over the half-hour Friday night spin-off show Can’t Stop Dancing on RTÉ One, plus stings on Radio 1’s The Ryan Tubridy Show, the designated “show partner”.

The BBC has always been a bit Reithian and BBC-like about Strictly, making sure to “educate” its audience about dance history and using its spin-off show for teaching viewers how to do steps like New Yorks (cha cha cha), botafogas (samba) and ochos (Argentine tango).

Much less is expected on this front from the RTÉ version, which will be looking to appeal to as many people as possible and create a much-needed buzz around the rest of its schedule.

Another reason to be a little bit worried about DWTS is that this is a live show, where anything can go wrong. Amanda Byram, who presents with Nicky Byrne, is a safe pair of hands, but pretty much the worst things that ever happened on Strictly have been mid-dance costume tangles or Bruno Tonioli saying “b*****ks”, so the bar is high.

It’s not that the Irish viewing public demands perfect smoothness, it’s just that laughing at awkward moments gets boring after a while – as do “comedy” turns and stumbling mediocrity on the dancefloor.

No, what DWTS needs to shimmy into the audience’s fickle hearts on cold winter nights is obvious. It needs some brilliant dancers. Des Bishop, this is your moment.

Lucy Kellaway: Poolside working no longer a sign of importance 21:07
Project Eagle: What was it and why is it in the news? 20:13
Stocks decline on poor corporate earnings 17:44
AIB defends ‘incredibly’ high €1.2bn loans charge as 2008 haunts 17:31
Microsoft now looking to acquire TikTok’s entire global business 16:57
Search executive
jobs on irishtimes.com