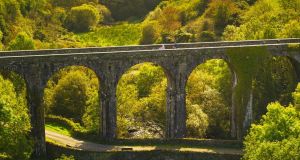 Fáilte Ireland may have been busy lately preparing its €6 million marketing blitz to ramp up staycation revenues, but February’s miserable weather hasn’t escaped it. For what else are the recent deluges other than an unsubtle reminder to Irish optimists that they can’t and shouldn’t count on two weeks of constant sunshine in Kerry or Connemara come the summer?

Luckily the authority is steeped in realism. In its bid to increase the percentage of Irish people who holiday in the Republic from 56 per cent to 58 per cent – bringing in a forecasted €32 million more a year in domestic tourism revenues, or €96 million over three years – it knows that those of us who chase “the sun on their back” in warmer climates won’t ditch these plans for a day out at Birr Castle.

Instead the identified opportunity is for Irish tourism businesses to snatch a bigger share of shorter breaks – the ones people often take in off-peak periods of the year when less-than-glorious weather isn’t so much of a disappointment. It’s not only an opportunity, of course. It’s a perceived need, given ongoing worries about the post-Brexit level of custom from British holidaymakers.

So Fáilte Ireland’s new “Keep Discovering” advertisements are predicated on the idea that many of us have either forgotten what is on our doorstep, or what’s on our doorstep has changed since we last visited it. You think you know Ireland, but then again, have you been to Birr Castle? Or Wexford’s National Heritage Park? Or the Waterford Greenway?

The Irish tourism industry isn’t only going up against the allure of the overseas mini-break, however. “We’re also competing with Netflix, ” says Fáilte Ireland’s director of marketing, Niall Tracey. “Stay at home, light the fire, snuggle in and binge-watch the TV.”

That sounds lovely. But if the comfortably sofa-bound do happen to venture on to a linear television channel or broadcasters’ video-on-demand player over the next two months, they will soon be met with alternative suggestions of things to do, see and tell their friends about, courtesy of Fáilte Ireland’s campaign.