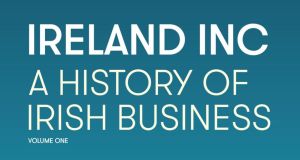 Ian Hyland said the near-600 page book is “the first volume . . . of a history and chronology of the entire Irish economy” that he intends to publish.

Denis O’Brien says “every minister for communications is conflicted” in decisions about the television licence fee because, he says, RTÉ gives the minister and other cabinet members “a platform for themselves on a daily basis”.

Mr O’Brien, founder of the Communicorp radio group that owns Newstalk, says two-thirds of Irish radio stations are loss-making, and he urged the broadcasting sector’s regulator, the Broadcasting Authority of Ireland (BAI), to be “tougher” on RTÉ.

“[RTÉ] have a massive featherbed of money coming at them every month from the licence fee,” he said, in an interview published in a new business book.

The businessman made his comments in Ireland Inc: A History of Irish Business, which was published this week by a company owned by the Business & Finance magazine publisher Ian Hyland.

The book contains more than 20 essays on various aspects of the Irish economy, as well as a slew of previously unpublished interviews with senior Irish business figures, including Mr O’Brien, Dermot Desmond, Peter Sutherland, Michael Smurfit and Leslie Buckley.

In his interview, Mr O’Brien also calls on “the private sector” to top up the salaries of university professors whose pay is limited by State caps, so that Irish third-level institutes can pay “whatever it takes” to attract the best teachers to prevent universities sliding down international rankings.

Mr O’Brien also called for private-sector interests to direct funding towards the Department of Foreign Affairs to help pay for lobbyists in Washington to push the interests of illegal Irish immigrants in the United States.

He also suggested that the State should “have a fund” to invest in ambitious Irish businesses, to allow their founders “pay off their mortgage” and concentrate on taking the companies global.

Mr Desmond, a long-time ally of Mr O’Brien and the founder of biotech security firm Daon, in his interview urged the creation of an Irish “Silicon Valley” to harness the “reservoir of knowledge” imported into Ireland from US multinationals Twitter, Facebook and Google.

The billionaire also harshly criticised Irish society for the way it treats business success and failures: “I think we live in a world in Ireland where we are envious . . . People in fact like to see people down. I don’t think people in Ireland like to see people coming back up, or coming up in the first place. Other people’s success should not affect our own happiness.”

Mr Smurfit criticised the modern focus on corporate governance and moves to rein in excessive executive pay: “I think shareholder activism is a bad thing.”

Meanwhile, former public servant TK Whitaker, who died at the beginning of this year, had already given an interview that is only now being published in which he expressed concern that Ireland is not “making enough effort to be highly competitive over a wide range of products”.

Speaking to The Irish Times following publication this week, Mr Hyland, said it was important to let the State’s most senior business people “tell their own stories”.

He said the near-600 page book is “the first volume . . . of a history and chronology of the entire Irish economy” that he intends to publish.