Carole Coleman and Justin McCarthy complete the on-air line up 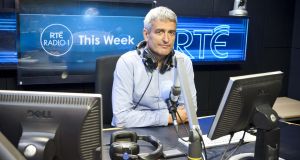 David McCullagh in the This Week studio

RTÉ Prime Time presenter David McCullagh will join the team on the This Week programme with Carole Coleman and Justin McCarthy part of a new on-air team.

The moves come as former presenter Colm Ó Mongain takes up the role of deputy foreign editor in RTÉ while Brian Dowling has moved to become RTÉ’s head of editorial standards and compliance.

The programme, which has around 197,000 weekly listeners, will also see a new editor at the helm as former reporter John Burke moves behind the microphone.

It is understood Carole Coleman, the broadcaster’s former Washington Correspondent, will retain general newsroom duties while Justin McCarthy, who joined Morning Ireland in 2013, will continue in RTÉ’s political unit.

“In November, This Week will celebrate half a century of breaking news and agenda-setting journalism. Now, 50 years after Mike Burns and Sean Duignan presented the first edition, I’m delighted that David McCullagh is returning to This Week to anchor the programme through its anniversary season joined by Carole Coleman and Justin McCarthy,” said Jon Williams, RTÉ director of news and current affairs.

Aside from the most recent presenting team of Colm Ó Mongain and Brian Dowling, previous hosts include Gerald Barry, Sean O’Rourke, Gavin Jennings and Richard Crowley, who left RTÉ earlier this year.