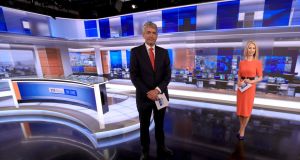 RTE journalist and historian David McCullagh is to become co-host of the broadcaster’s flagship Six One News programme.

McCullagh is a former political correspondent and currently works as co-host of the Prime Time current affairs show and on the This Week radio programme.

He is also a noted historian, having graduated from UCD with a PhD in politics and going on to author four books: A Makeshift Majority: the first Inter-party Government; The Reluctant Taoiseach: A biography of John A. Costello; and both Rise and Rule, a two volume biography of Éamon de Valera.

Commenting on his appointment, Mr McCullagh mentioned his late predecessor and “much loved colleague” Keelin Shanley who died earlier this year.

“Over the last few months the need for accurate information has never been greater, and viewers have turned to RTÉ News and Current Affairs in astonishing numbers,” he said. “We aim to continue meeting that need.”

Director of RTÉ News & Current Affairs Jon Williams said McCullagh had helped Prime Time to “reach some of the biggest audiences in its history during the Covid-19 lockdown” and would be an asset to the daily news programme “as Ireland emerges from this emergency facing some difficult challenges, and heads towards the centenary of the foundation of the State.”

McCullagh will take up his role from September.