Dark drama The Fall proves a bright spot for RTÉ 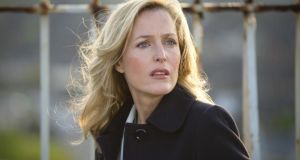 Gillian Anderson as DSI Stella Gibson in The Fall.

Will Detective Superintendent Stella Gibson (Gillian Anderson) hunt down Belfast’s serial killer (Jamie Dornan) in the final episode of The Fall this Sunday?

The suspense has sustained an average audience of 374,000 across the first four episodes of the crime drama as it is broadcast on RTÉ on Sunday nights. (BBC Two, which commissioned the drama, airs it 24 hours later.)

An average of 403,600 tuned into the creepy first episode on RTÉ, with the number dropping to 353,100 for the second equally chilling week. The audience increased again to 404,200 for the third instalment and tailed off on the bank holiday weekend to 333,300 for the no-less disturbing penultimate episode.

The BBC recommissioned the series after the first three episodes averaged 3.5 million viewers in the UK, making it the biggest BBC Two drama to launch since the more cheerfully barbaric Rome in 2005. RTÉ is “geoblocked” on television screens in the North while it broadcasts The Fall, in order to protect BBC Two ratings in the region.

The BBC drama, produced by Artists Studio in conjunction with BBC Northern Ireland, secured funding from Northern Ireland Screen. RTÉ is also on board as a co-production partner, but in a lesser capacity – making the success of the Anderson-led show in the UK something of a blessing for the cash-strapped drama department at Montrose.

The RTÉ ratings, while much lower than averages for Love/Hate and the axed Raw, are healthy for the time of year, and are especially attractive given the broadcaster didn’t have to stump up the bulk of the cash to make it.


New programming
Cost-effective ratings hits are badly needed. The arrival of The Fall in May comes on the back of a poor April for RTÉ from a commercial standpoint, according to a market update from media buyer Carat, which described recent declines in the performances of both RTÉ and TV3 as “quite worrying”.

“RTÉ will be hoping that their new programming, scheduled to hit the screens over the next few months, including The Hit, Quirke and Suits, will help address this concern.”

But before the summer television drought properly sets in, The Fall, written by Allan Cubitt, will wrap up its first series with what the BBC promises will be “a gripping cliffhanger”.

1 Who are Ireland’s 17 billionaires?
2 My father in a nursing home wants to gift me his house
3 State subsidises public sector retirees to cover gap until State pension
4 Are there annual limits on inheritances or gifts to a child?
5 Swiss police suspect Davos plumbers of being Russian spies
6 Corporate tax change is inevitable, says Donohoe
7 O’Flynn says subsidiary ‘mistakenly’ sought permission for student apartments in Birmingham
8 Property firm sues engineering company over waterproofing of basement
9 Insolvency arrangement approved for man with €60 million in debts
10 Help, I’ve no PRSI stamps – can I still get a pension?
Real news has value SUBSCRIBE

O’Flynn says subsidiary ‘mistakenly’ sought permission for student apartments in Birmingham 17:57
Time running out for those wanting to avail of SBCI ‘future growth’ loans 17:35
Profits rise 22% at Gucci Ireland 17:22
EasyJet sees improvement in first half on robust demand for flights 17:22
Disney Plus and Baby Yoda available to Irish subscribers the week after St Patrick’s Day 16:47
Search executive
jobs on irishtimes.com