Power-craving politicians, elusive psychopaths and paranoid gangsters will be at the centre of RTÉ One’s drama offering in its 2014-2015 season. 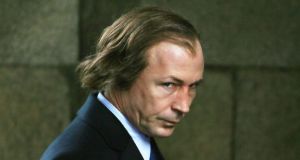 Power-craving politicians, elusive psychopaths and paranoid gangsters will be at the centre of RTÉ One’s drama offering in its 2014-2015 season, while the broadcaster’s line-up of documentaries will address pornography, women prisoners and Brendan Behan.

Charlie, a trilogy of feature-length dramas starring Aidan Gillen as former Taoiseach Charlie Haughey, is likely become event television for the channel. Made by RTÉ, Element Pictures and the UK company Touchpaper Television with funding of €1 million from the Broadcasting Authority of Ireland, Charlie will chart Haughey’s bid for power in 1979 through to his exit from politics in 1992.

The fifth series of Love/Hate, which is due to air before Christmas, will be “explosive”, said RTÉ Television’s managing director Glen Killane. Love/Hate “has been fantastic for us”, Mr Killane said. The finale of the fourth series was the second most-watched programme on Irish television last year.

The six episodes due to air before Christmas are likely to be the penultimate run of the drama, which has been a Sunday night ratings-winner for RTÉ One.

Also returning for six episodes is the Belfast-based BBC Northern Ireland drama The Fall, which stars Gillian Anderson as DSI Stella Gibson and Jamie Dornan as the serial killer she is hunting.

RTÉ is a junior funding partner for the drama, written by Allan Cubitt, and it is likely to continue its arrangement with the BBC to broadcast the series ahead of its transmission on BBC Two.

Viewer interest in The Fall may be boosted “the 50 Shades of Grey effect”, Mr Killane said. Since the first series aired, Dornan’s star has risen and the former model is due to appear as the title character in the film adaptation of EL James’s bestselling S&M novel early next year.

Mr Killane said he believed RTÉ had a “really strong drama slate” for the months ahead. As well as Charlie, Love/Hate and The Fall, RTÉ soap opera Fair City will be celebrating its 25th anniversary this autumn.

Documentaries due to air on RTÉ One include Pornation, a two-part series by Animo Television examining pornography consumption in Ireland and its potential impact on relationships, intimacy and attitudes to sex. Meanwhile, Women on the Inside, made by Midas Productions, will focus on the Dóchas Centre, a medium-security, closed prison on the grounds of the Mountjoy Prison Campus.

Actor Adrian Dunbar will present an arts documentary that reassesses the life and work of 20th century Irish writer Brendan Behan. Dunbar last year portrayed Behan in the Belfast Lyric Theatre’s production of Brendan at the Chelsea, a play by Behan’s niece Janet Behan, which was also directed by Dunbar.

RTÉ One is Ireland’s most-watched television channel by a comfortable margin, usually recording an audience share of close to 20 per cent. The channel will get a new controller in November when Adrian Lynch, the owner of Animo Television, joins the broadcaster.

1 Who are Ireland’s 17 billionaires?
2 State subsidises public sector retirees to cover gap until State pension
3 My father in a nursing home wants to gift me his house
4 Are there annual limits on inheritances or gifts to a child?
5 Corporate tax change is inevitable, says Donohoe
6 Countries that fail to attract immigrants will lose out – Microsoft chief
7 Domino’s Pizza spared costs despite losing appeal
8 Ulster University and Dell sign £85m partnership
9 Cubic Telecom raises more than €11 million in funding
10 Politicians walk into pensions minefield with eyes wide open
Real news has value SUBSCRIBE