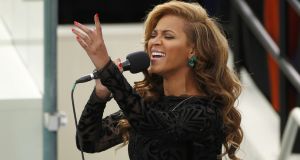 Beyoncé. Pretax profits at Sony’s Irish subsidiary rose from €312,000 to €1.2 million in the 12 months to March. Photograph: Reuters

The Irish arm of Sony Music, whose artists include AC/DC, Beyoncé, Bruce Springsteen and Christy Moore, reported a huge surge in profits and revenues in the year to the end of March.

The music label paid a €5 million dividend to its parent Sony Music Entertainment UK after pretax profits jumped by 292 per cent from €312,000 to €1.2 million.

The firm’s ultimate parent is one of the largest music and entertainment companies in the world with revenues of $1.52 billion (€1.28 billion) in its first quarter ending June 30th.