Plus: family businesses fear pandemic will finish them; and sick-pay Bill imminent 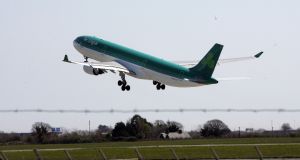 Aer Lingus lobbied the Department of Transport to argue against quarantine measures at EU level as the bloc was preparing to publish its standardised travel policy and pushed for existing requirements on passengers to restrict their movements to be dropped, according to the Sunday Business Post.

The Government is this weekend preparing to tighten travel restrictions amid growing concern over the spread of new variants of Covid-19 into Ireland.

Taoiseach Micheál Martin said passengers may be held in quarantine for five days if arriving without a negative Covid-19 test, while Ministers are also likely to consider changes to the visa regime or potential hotel quarantine for travellers from South Africa and Brazil where new variants of the virus have been identified.

Documents released under Freedom of Information legislation show Aer Lingus wrote to the department in October arguing that quarantine measures and restrictions on passengers’ movements were “not necessary” and calling for an “appropriate testing regime based ideally on an agreed EU testing protocol” to be adopted.

Almost a quarter of chief executives of family businesses have reported that the loss of control of their companies is a key concern over the next six months, the Sunday Independent reports.

Findings from the survey aspect of the research revealed that 83 per cent of chief executives felt the pandemic would negatively impact their business. It also found nine-in-10 of the chief executives surveyed believed the family business would run out of cash within the next six months if the crisis did not abate.

Workers entitled to statutory sick pay within a year

Ireland is to begin a statutory sick-pay scheme within a year, with employers having to pay workers who are ill for two weeks – and the period of cover is likely to rise in the future, according to the Sunday Times. Leo Varadkar, Minister for Enterprise and Employment, told representatives of trade unions and employers last week that he would publish the outline of a sick-pay Bill in March. He hopes it will be enacted by the summer and introduced by the end of this year, or early in 2022.

Trinity College Dublin has been charged almost €100,000 in “development contributions” by Dublin City Council for erecting two marquees in its grounds to provide socially distanced lectures. Last week the college lodged an appeal with An Bord Pleanála to contest the fee, which it claims is excessive for a series of temporary structures, the Sunday Time reports. While the Government has relaxed the need to obtain planning consent for temporary works that are needed to respond to the pandemic, universities are not covered by the exemption.

Unions to query Bank of Ireland’s use of agency staff

Employee representatives at Bank of Ireland plan to raise concerns about its use of contract workers just months after the bank carried out almost 1,500 voluntary redundancies, according to a report in the Sunday Business Post.

The Financial Services Union said it had been informed about the increased use of fixed-term contract and agency workers at a small number of branches in Dublin and was raising the matter with the bank.

“Bank of Ireland has no agreement with the FSU to replace full-time staff with contract staff. With 650,000 people in receipt of state unemployment it is not acceptable that these roles are not advertised as permanent and pensionable jobs,” said John O’Connell, general-secretary of the union.

“We are writing to the bank to urgently request more information and asking them to defer any recruitment plans until more clarity is provided. It is unclear if these agency staff have the required qualifications to operate in a regulated sector like banking.”