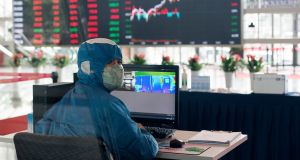 A worker at the Shanghai exchange wears anti-coronavirus clothing.

Global markets rose after Beijing signalled it was likely to ramp up stimulus measures as authorities seek to cushion the economic blow from the coronavirus outbreak.

The prospect of central bank support has prompted investors to flood back into equities this month even as China’s economy faces significant disruption and the impact spills into global supply chains.

European stocks climbed, with the benchmark Stoxx 600 index up 0.5 per cent to take its gains so far in February to more than 5 per cent. US markets are closed for Presidents’ day.

Chinese stocks rose sharply, with the CSI 300 of Shanghai- and Shenzhen-listed shares climbing 2.3 per cent. The index has now recovered all the losses from its biggest one-day sell-off in more than four years in early February.

Monday’s move came after the People’s Bank of China cut interest rates by 10 basis points on Rmb200 billion (€26.3 billion) of loans offered via its medium-term lending facility, a key rate for interbank lending.

The onshore traded Chinese currency rose 0.1 per cent on Monday to Rmb6.9809 per US dollar, on track to notch its first gain in four sessions.

“The market is largely trading on the expectation of policy easing” similar to that delivered in 2015, said Larry Hu, chief China economist at Macquarie, when the central bank opened the spigot as investors feared the economy was heading for a hard landing. “At this stage, the most likely policy options are to cut rates and provide targeted easing to impacted companies and areas.”

Moody’s has lowered its forecasts for global growth this year, warning that the coronavirus outbreak has “diminished optimism” about the world economy.

“If the outbreak persists, the domestic and international supply chain disruptions are likely to become significant, amplifying the shock to the global economy,” said Madhavi Bokil, a Moody’s vice-president.

The coronavirus outbreak has wreaked havoc on the Chinese economy by closing manufacturing plants and disrupting supply chains. That has prompted some economists to forecast that growth in gross domestic product could fall below the important 6 per cent mark in 2020.

But President Xi Jinping said in a commentary published in an influential Chinese Communist party journal over the weekend that the country’s leaders “still need to deliver this year’s economic and social targets”. That has fuelled market expectations Beijing could ramp up stimulus in order to ensure targets are met.

Analysts expect that the loan prime rate, a benchmark for commercial lending, will also fall on Thursday at the monthly review. “More cuts will come later as China is under a new rate cutting cycle, in our view,” Mr Hu said.

The “positive impact of these stimulus policies on economic growth should materialise increasingly from this week onwards as policy priorities have started to shift from containing the spread of virus to restarting industrial and services activities”, said Li-Gang Liu, Citigroup’s chief China economist.

China’s liquidity injection did little for equities elsewhere in Asia. Tokyo’s benchmark Topix stock index closed down 0.9 per cent after data showing Japan’s economy shrank at an annualised rate of more than 6 per cent in the fourth quarter. – Copyright The Financial Times Limited 2020