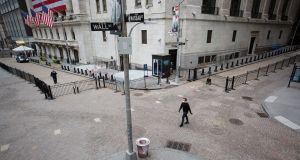 Wall Street stocks took just 16 days to tumble 20 per cent from their record high, easily eclipsing the previous record for swiftest fall into a bear market that was set in 1929 at 44 days

Bruised investors closed the books on the biggest quarterly drop for US equities since the financial crisis on Tuesday, as a late sell-off in the final trading session brought losses to 20 per cent since the start of the year.

A rally over the past week, as investors warmed to the emergency actions of global governments and central banks, has saved Wall Street from notching up its worst quarter since the Great Depression.

But the S&P 500 closed 1.6 per cent lower in New York on Tuesday amid more grim forecasts for the economic toll of the coronavirus pandemic in the US. The tech-heavy Nasdaq Composite fared better, down 1 per cent, while the Dow Jones Industrial Average was 1.8 per cent lower.

“This bear market has been unusual, not because of the scale of the decline but rather because of the speed and the volatility,” said Peter Oppenheimer, chief equity strategist at Goldman Sachs.

Wall Street stocks took just 16 days to tumble 20 per cent from their record high, easily eclipsing the previous record for swiftest fall into a bear market that was set in 1929 at 44 days, noted Mr Oppenheimer.

Along the way, Wall Street’s “fear gauge” – the Vix - soared to a record high in mid-March, the Federal Reserve cut interest rates to near zero and relaunched its asset-purchase programme, and US Congress approved a $2 trillion (€1.8 trillion) stimulus package.

A new forecast for US gross domestic product published by Goldman Sachs suggested a 34 per cent annualised contraction in the second quarter, indicating it is still to see the worst of the crisis. The bank is now predicting a US unemployment rate of 15 per cent by mid-year.

The broad MSCI measure of developed and emerging market equities has shed a fifth of its value over the past three months in the sharpest drop since 2008. London’s FTSE 100 has fared worse, down 25 per cent in its heaviest rout since 1987.

Equities in Europe rose on Tuesday, having taken some comfort from tentative signs the Chinese economy is stabilising after Covid-19 lockdowns stifled activity in February.

Mr Oppenheimer said there was “encouraging evidence coming out of China and some other countries as production and demand start to recover”.

China’s National Bureau of Statistics purchasing managers’ index reading of 52 marked a sharp jump in manufacturing activity in March from a record low of under 36 in February. Any reading above 50 indicates growth.

“The shape is almost a perfect V and offers a glimpse of hope that economic effect might be shortlived,” said Daniel Bergvall, economist at SEB.

Investors have kept a close eye on China’s recent PMI readings for signs of how the world’s second-biggest economy is faring and the extent to which large-scale stimulus efforts have succeeded.

Mr Bergvall said investors had already priced in what is expected to be a historic contraction in global output during the second quarter, which begins on Wednesday, and are instead looking for signs on how and when the world’s economy will recover.

“Sentiment has recovered substantially after the stimulus and slowing contagion pace,” said Ken Cheung, chief Asia currency strategist at Mizuho Bank, who said the figures could be “an encouraging sign of China’s recovery ahead”.

Analysts warned against reacting too exuberantly to the numbers. “This does not mean that output is now back to its pre-virus trend,” said Julian Evans-Pritchard, senior China economist at Capital Economics. “It simply suggests that economic activity improved modestly relative to February’s dismal showing.”

Elsewhere, oil prices rose after a tumultuous start to the week in which West Texas Intermediate, the US marker, dropped below $20 a barrel. WTI settled up 1.9 per cent at $20.48 a barrel on Tuesday while international benchmark Brent crude was down 0.2 per cent to $22.71.

Sovereign bond yields trimmed their rise from earlier in the session, leaving the 10-year US Treasury yield flat 0.67 per cent. – Copyright The Financial Times Limited 2020

1 Michael Smurfit: ‘I asked Trump to invite me to the White House for my 80th birthday’
2 ‘I’m so lucky to be in the Caribbean – a million miles from Derry Girls’
3 Small businesses are cannon fodder in zealous anti-virus experiment
4 Household savings soar as consumers stop spending
5 Tax and the Pandemic Unemployment Payment: Your questions answered
6 ‘Never mind GDP; the most fundamental job of any leader is to keep his people alive’
7 Irish business of Carluccio’s restaurants to be wound up
8 ‘The recovery needs to be a full-scale economic renewal’
9 Donohoe tweaks wage subsidy scheme so mothers returning from maternity qualify
10 ‘It’s safe to fly’, EU aviation safety boss says
Real news has value SUBSCRIBE