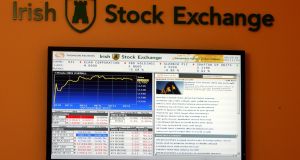 Bank of Ireland was one of the biggest fallers, down 3.63 per cent. Photograph: Cyril Byrne

European stocks retreated in thin trading on Tuesday, after briefly paring losses, as a stronger euro weighed on exporters.

US stocks declined the most in two weeks after New York Federal Reserve president William Dudley said an interest rate hike in September was possible.

Volumes were thin as the Iseq finished the day down just under 0.2 per cent.

The growing worries about the British economy appeared to affect several prominent Irish players in the UK market. Ryanair finished the day down 1.53 per cent, while Paddy Power Betfair fell by 1.42 per cent.

Irish Continental Group, the operator of Irish Ferries, finished the day down almost 0.9 per cent, while C&C, which owns the Magners brand in the UK, was down 0.92 per cent.

Bank of Ireland was one of the biggest fallers, down 3.63 per cent. CRH, the building materials heavyweight, dragged the Iseq into positive territory, up 1.9 per cent.

FBD rose almost 0.8 per cent after the insurer was upgraded by Goodbody.

Stocks most exposed to a weaker domestic British economy, such as banks and retailers, underperformed. EasyJet and IAG fell more than 2 per cent, posting some of the biggest slides on the FTSE 100.

Retailer Marks & Spencer fell 3.2 per cent, while the FTSE 250 mid-cap index – which contains more domestically focused companies than the more global ones in the FTSE 100 – fell 0.7 per cent.

However, mining stocks outperformed to rise in spite of the weaker market, with Antofagasta surging 8.7 per cent after posting an increase in mid-year profits. Rio Tinto Group and Glencore plc rose 2 per cent.

Away from the top tier, shares in British building giant Balfour Beatty were up more than 1 per cent after it celebrated its biggest US contract to date, securing a £524 million deal to electrify 84km (52 miles) of California’s railway.

Carmakers were among the biggest losers in industry groups as subdued prospects for a Federal Reserve rate increase this year weakened the dollar, sending the euro higher.

Volkswagen AG slipped 1.7 per cent after a report the US department of justice was said to find evidence of criminal acts in a diesel-emissions cheating inquiry. Renault and PSA Group fell more than 2.2 per cent.

Schindler Holding slid 4.4 per cent after forecasting a decline in the global elevator and escalator market.

German industrial-gas supplier Linde jumped 11 per cent after saying it was holding talks to merge with Praxair, confirming media reports.

The all-stock deal, which could be valued at more than $30 billion, may be reached as early as the coming weeks, people familiar with the matter said.

Heading into the afternoon, eight of the 10 major S&P 500 indexes were lower, with the traditionally defensive sectors – telecom service providers and utilities – declining the most.

Shares of industrial gas supplier Praxair jumped 5 per cent to $123.93 after the company announced the early-stage talks of a merger with German peer Linde. Praxair was among the top influences on the S&P 500.

In commodities, gold futures rose 0.2 per cent to $1,349.70 an ounce on the Comex in New York, paring gains of as much as 1.2 per cent earlier. Nickel dropped after posting the biggest advance in more than two weeks on Monday. (Additional reporting: Reuters/Bloomberg/PA)