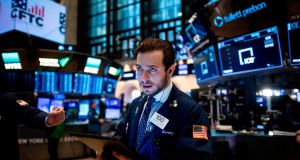 European markets were broadly flat on Tuesday as investors awaited the signing of the phase one US-China trade deal.

It was a flat day on the Dublin market with banks seeing some trading action as the US earnings season kicked off with JPMorgan, Citigroup and Wells Fargo reporting on Tuesday.

Paddy Power-owner Flutter Entertainment fell marginally on the back of news that UK gamblers will no longer be able to use their credit cards to place bets online. The UK Gambling Commission’s new rules, which have been well flagged, mean people wishing to place bets online will have to do so using a debit card or cash deposited into an account. Flutter shares closed 0.6 per cent lower at €106.9 on its Irish listing.

While there was little in the way of news pertaining to Irish stocks on Tuesday, traders pointed to an uptick in activity following the subdued post-Christmas period. Among other gainers on the day were Glanbia, up 1.45 per cent to €10.50, and Uniphar, up 0.31 per cent to €1.28.

The FTSE 100 closed 0.1 per cent higher while the FTSE 250 rose 0.2 per cent driven by a 9.2 per cent jump in miniature wargame maker Games Workshop after reporting record profit and sales.

Another gainer on the mid-cap index was Dublin-headquartered builders merchant Grafton Group, which rose 4.25 per cent. The company said revenue from continuing operations rose 2.7 per cent to £2.67 billion.

Homebuilder Taylor Wimpey was the second-best performer on the FTSE 100, rising 4 per cent after a trading update showed that its order book surged 22 per cent in 2019, aided by the government’s help to buy scheme.

On its UK listing, Flutter Entertainment gave up 1.2 per cent while rival William Hill fell 2.5 per cent. Other industry players GVC and 888 recouped earlier losses to end marginally higher.

AIM-listed online fashion retailer Boohoo advanced 5 per cent to a record high after reporting robust performance in its Christmas trading period and hiking its full-year forecast.

European shares were little changed on Tuesday as investors locked in some gains after a recent record-setting rally. The pan-European STOXX 600 index ended 0.29 per cent higher on the day, reversing earlier losses, after hitting a record high last week on de-escalation in US-Iran tensions.

European bank stocks were among the worst performing sectors on Tuesday, shedding about 0.1 per cent.

Germany-based speciality chemicals company Evonik was among the worst individual performers on the STOXX 600, dropping 3.99 per cent after its controlling shareholder sold a 5.2 per cent stake in the company.

Aluminium producer Norsk Hydro was among the top early gainers but pulled back later on for a 1.33 per cent advance on the day after Citigroup raised the stock’s price target. The stock also propped up the basic resources sector, which was the best performing regional subindex over the trading session.

Kicking off the fourth-quarter earnings season, the largest bank in the United States, JPMorgan Chase, rose 2.3 per cent after reporting a better-than-expected profit on strength in its trading and underwriting businesses, keeping the blue-chip Dow index in the positive territory.

Wells Fargo dropped 3.7 per cent after reporting a slump in profit, as it set aside $1.5 billion toward legal expenses, while Citigroup rose 2.3 per cent as it topped Wall Street profit estimates.

Technology and internet stocks that took the main indexes to record highs on Monday – Amazon. com, Apple, Nvidia and Facebook – shed between 0.4 per cent and 1 per cent.