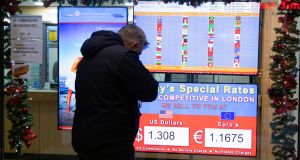 European stocks jumped on Friday, with the Stoxx Europe 600 briefly surpassing its record closing level, as the US-China phase-one trade deal and Boris Johnson’s victory in the UK general election helped the market resume its strongest rally in a decade.

The clear Conservative majority gives the British prime minister the mandate he seeks to pull the UK out of the EU next month, potentially removing a key source of uncertainty for investors.

The Iseq reached a 12-year high as it received an immediate boost from the decisive UK election result in morning trade, before investors’ exuberance calmed, resulting in more modest gains for most. The market still closed 1.6 per cent higher, with several Brexit-exposed stocks enjoying decent advances.

Dalata Hotel Group, which operates in both the UK and Republic, extended its early gains, closing up 8.3 per cent at €5.76. Ryanair, which had earlier climbed more than 7 per cent, finished with a 3.4 per cent gain at €14.37.

Packaging company Smurfit Kappa also had a good day, banking a 2.3 per cent rise to finish at €33.02.

Food group Glanbia was among the few fallers, declining 1 per cent to €9.81, while Irish Residential Properties Reit lost 2.9 per cent to €1.62.

The FTSE 100 index rose 1.1 per cent as a rally in utilities, retailers, housebuilders and banking stocks offset the drag from sterling, which surged to a 19-month high against the US dollar.

Housebuilding stocks soared, with Taylor Wimpey, Berkeley and Persimmon all up about 14 per cent, reaching record highs and topping the blue-chip index.

The mid-cap stocks on the FTSE 250 surged as much as 5.4 per cent, closing at a record high on hopes of an economic recovery and political clarity. Trading volumes on the FTSE 100 index surged to nearly three times their daily average.

Among financials, RBS and Virgin Money stood out, rising 8.4 per cent and 18.7 per cent.

The Stoxx Europe 600 gained 1.1 per cent, piercing its historically high closing level from April 2015 earlier in the day but closing just shy of its record. In Germany the Dax rose almost 0.5 per cent, while the French Cac 40 was up 0.6 per cent.

German consumer goods company Henkel slipped more than 3 per cent as it said it expects its margins to fall in 2020.

Wall Street fell in volatile trading in the first half of its session on Friday, as investors remained confused about signs of progress on a US-China trade deal despite comments from both sides that they had arrived at an initial agreement.

All three major stock indexes hit fresh record highs as Beijing said it had agreed on the context of a trade pact with Washington, then turned lower after comments that a deal had not yet been formally signed.

Facebook traded down 1 per cent. The stock was knocked late on Thursday on reports that US antitrust enforcers may go to court to stop its plans to merge technology systems across WhatsApp, Instagram and Facebook Messenger.

Broadcom dropped 5 per cent as analysts were wary of the chipmaker’s revenue forecast for 2020. – Additional reporting: Bloomberg/Reuters.

1 Election adds to headaches for AIB boss Colin Hunt
2 Seán FitzPatrick’s new Greystones’ home plan runs into privacy issues
3 Ad agency Chemistry closes after 20 years
4 Irish people like nothing more than being bribed with their own money
5 Fast-growing frozen food group has a strong appetite for success
6 Hogan warns Britain on US trade deal as EU set to impose tariffs
7 Greencore investors urged to spurn Coveney’s €315,000 pension
8 The Irish economy is thriving but if you’re not feeling it – here’s why
9 Volkswagen chief warns ‘sacred cows’ need slaughtering
10 GoMo is being investigated by advertising authority
Real news has value SUBSCRIBE