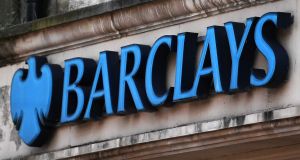 Shares in Barclays jumping 7 per cent as its consumer businesses swung back to profit and provisions against bad loans fell in the third quarter. Photograph: EPA

European shares rose on Friday, with Irish banking stocks standing out as a strong spot on the Iseq, as positive earnings updates from Barclays and a surge in Airbus lured investors into the market.

Still, nagging worries about the economic impact of surging Covid-19 cases saw European markets post their biggest weekly decline in a month. The pan-European Stoxx 600 index advanced 0.6 per cent, while the Iseq gained 0.8 per cent to 6,674.4.

AIB jumped 4 per cent to almost €1 and Bank of Ireland powered 5.2 per cent higher to €1.99 after UK banking giant posted better-than-expected quarterly figures. The two main Irish banks are set to post trading updates next week.

Sentiment was also helped by fresh hopes that a post-Brexit trade deal will ultimately be agreed between the UK and EU.

Housebuilder Cairn Homes moved 3.8 per cent higher to 85.1, while Hostelworld rose 4 per cent.

Green energy group Greencoat Renewables dipped 1.3 per cent to €1.17 even as it announced the acquisition of another wind farm, in Co Tipperary, and completed a new €200 million five-year term loan with a syndicate of three banks.

The FTSE 100 index closed up 1.3 per cent, with shares in the UK lender jumping 7 per cent as its consumer businesses swung back to profit and provisions against bad loans fell in the third quarter.

The domestically focused mid-cap FTSE 250 index, considered a barometer for Brexit sentiment, ended 1.2 per cent higher after Reuters reported France is laying the ground for a compromise on fisheries, one of the key sticking points in trade negotiations between the European Union and the UK.

“There is a renewed enthusiasm to talk again. Perhaps there will be concessions made and if there is some kind of agreement going forward, that increases the chances of a deal,” said Susannah Streeter, senior investment and markets analyst at Hargreaves Lansdown.

Planemaker Airbus jumped 5.6 per cent after it told suppliers to be ready for an output hike once demand recovers from the coronavirus crisis.

Swiss engineering company ABB was among the biggest drags on the Stoxx 600 after saying it expects its orders and revenue to remain under pressure for the rest of 2020.

Wall Street’s main indexes struggled for direction in early afternoon trading as investors fretted over an impasse in Washington on new coronavirus aid laws, while turning cautious ahead of the November 3rd presidential election.

The Dow and the Nasdaq were weighed down by a slump in chipmaker Intel Corp after it reported a drop in margins as consumers bought cheaper laptops and pandemic-stricken businesses and governments clamped down on data centre spending.

Uncertainty over the timeline of the relief legislature has been weighing on Wall Street’s major indexes, which were set to end a choppy week slightly lower.

Gilead Sciences rose as its antiviral drug remdesivir became the first and only drug approved for treating patients hospitalised with Covid-19 in the US.

American Express dropped as it missed estimates for third-quarter profit after its customers spent less during the coronavirus-fuelled economic slowdown and it set aside money for potential payment defaults. – Additional reporting, Reuters