Investors unnerved by Brexit, Covid-19 and US election jitters

Shares in AstraZeneca rose 1.7% as it resumed trials of its Covid-19 vaccine 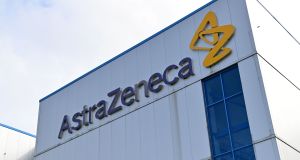 The clinical trial for the Covid-19 vaccine being developed by AstraZeneca and Britain’s University of Oxford resumed in the United States on Friday. Photograph: Paul Ellis/AFP

Ryanair Holdings’ shares fell as airlines across Europe bore the brunt of investors’ fears about the ongoing impact of Covid-19 restrictions. The airline group ended the day 2.91 per cent down at €12.69 on Monday, having touched lows of €12.615. Dealers noted that the Irish carrier performed better than rivals, whose stock was down 4-7 per cent.

Bank holiday trading in Dublin meant volumes were light, but dealers said sentiment across world markets turned. “It’s Brexit, the US election and Covid – people are starting to digest the fact that vaccines are not that close over the horizon,” said one.

Kenmare Resources, which runs a titanium mine in Moma, Mozambique, dropped 2.14 per cent to €2.75, after announcing that it had begun production at a new plant that would produce 1.2 million tonnes of ore a year from 2021.

A dealer said the announcement prompted a reaction from both buyers and sellers of the stock on Monday.

Aer Lingus and British Airways owner International Airlines Group (IAG) tumbled 7.6 per cent to 100.7p as investors ditched aviation stocks on the back of worries that virus rates are rising.

Budget carrier Easyjet, a key rival of Irish giant Ryanair, fell victim to the same negative sentiment towards the industry, shedding 5.25 per cent to 519.6p.

Irish builders’ supplier and owner of Woodie’s DIY chain, Grafton Group, was 2 per cent off at 722p. The group’s sole listing is in London, as many of the businesses it owns are based in Britain.

On the plus side, pharmaceutical group AstraZeneca rose 1.7 per cent to 8,077p as it resumed trials of its Covid-19 vaccine.

Coca-Cola European Partners (CCEP) rose 0.3 per cent after the soft drink bottler made a buyout offer of $6.6 billion for its Australian peer Coca-Cola Amatil Ltd.

German airline group Lufthansa fell 5.23 per cent to €8.05, following the rest of European aviation on Monday. Air France KLM dropped 4.04 per cent to €3.16.

Nick Nelson, head of European equity strategy at UBS, said the Swiss bank’s target for Europe’s Stoxx 600 index into the year end is 340 points, about 4.5 per cent below the current level, in part due to the impact of the latest round of restrictions.

US stocks’ decline accelerated on Monday afternoon, setting the Dow Jones Index for its worst day in more than seven weeks, as soaring coronavirus cases and political deadlock over the fiscal relief Bill raised doubts about the fate of the economic recovery.

US tech firms including Apple, Google-parent Alphabet and Facebook, which have Irish operations, are due to report third quarter earnings this week.