Investors buoyed by strong corporate earnings in Europe and US 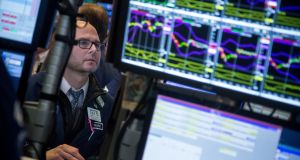 A trader works on the floor of the New York Stock Exchange on Friday. Stocks climbed after new figures showed the US economy had grown 3 per cent in the third quarter. Photograph: Michael Nagle/Bloomberg

Robust corporate earnings reports helped a broad advance in world equity markets on Friday. Despite political turmoil in Spain, European shares rose moderately while the Iseq in Dublin climbed by more than 0.7 per cent.

In the United States, stocks climbed and the dollar rallied after the economy there saw its strongest back-to-back quarterly growth in three years.

Trading volumes were reasonably light before the bank-holiday weekend.

CRH rose by almost 1 per cent as further infrastructure investment in the US by the Trump administration returned to the agenda.

There is speculation that the US president might support a hike in federal petrol tax to fund an outlay. CRH is a significant supplier of cement and other materials in the US.

C&C fell back by 0.7 per cent, giving up some of yesterday’s gains after it had suggested it may engage in further share buybacks.

Online gaming tech supplier GAN, backed by the Smurfit family, surged by more than 12 per cent after the US state of Pennsylvania announced it would legalise online gambling.

RBS shares were up 1.7 per cent after the state-owned bank beat expectations with strong third-quarter profit and a more robust capital ratio. Analysts said this provided a buffer to absorb further potential litigation costs, with a dispute with the US department of justice over mortgage-backed securities ongoing.

British Airways owner IAG was the top faller, down 6.9 per cent, as strong earnings and revenue performance were overshadowed by passenger growth figures and political turmoil in Spain, where it owns Iberia.

Tullow Oil, which has its main listing in London, also dropped 2.4 per cent after the group said it plugged and abandoned its Araku-1 well in Suriname after failing to strike oil.

Spanish stocks continued to lag as Europe’s worst constitutional crisis for decades comes to head in Catalonia. Melia Hotels fell by 3 per cent, while Banco Sabadell fell nearly 5 per cent.

On the German Dax, industrials and chemicals group Linde rose by 3 per cent, after it told investors it was on course to hit its full-year targets. It reported a 3 per cent rise in third-quarter profits.

Volkswagen gained more than 4 per cent after a hike in quarterly profits of 15 per cent, as the company moves on from the emissions scandal that wiped €24 billion of its market value two years ago.

French oil company Total was up by 1.5 per cent, after it reported third-quarter net income up 39 per cent.

Aerospace technology group Safran rose by more than 1.5 per cent on higher-than-expected revenues.

Healthy results helped Amazon jump 11.8 per cent , while Google parent Alphabet gained 6 per cent and Microsoft advanced 7.2 per cent. The tech sector has surged about 30 per cent this year.

Chevron dipped 3.5 per cent after the oil giant’s profit missed estimates as US production slipped. Merck slipped 4.42 per cent after the company reported a fall in revenue due to a cyber attack and loss of share for many of its older drugs.

Mattel plunged 14 per cent after the toymaker said it would miss its full-year revenue forecast and stop dividend from the fourth quarter.