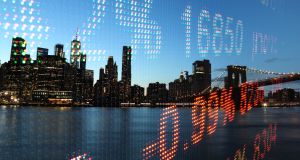 In New York, analysts expect first-quarter earnings for S&P 500 companies to fall 7.5 per cent compared with a January 1st forecast for a rise of 6.3 per cent. Photograph: iStock

Wall Street opened higher on hopes the coronavirus outbreak in the United States was close to its peak, while European markets closed flat or higher. Sentiment remained fragile, however, with all eyes on whether euro-zone finance ministers will agree an economic rescue package.

The benchmark Iseq all-share index was almost flat on Wednesday, closing just 0.1 per cent lower, in line with European peers.

There was little in the way of stock-specific news, with the exception of Dublin-headquartered Grafton Group, which said its top executives would take a temporary pay cut and suspend bonus schemes for the year. The company, listed in London, closed up 3.33 per cent.

Dalata Hotel Group, which has seen its share price hammered as a result of hotel closures across Britain and Ireland, gained on the day, closing 5.51 per cent higher at €2.77. Dalata has shed almost half of its market value since the Covid-19 crisis began.

The blue-chip FTSE 100 index ended 0.5 per cent lower after closing at a near two-week high on Tuesday.

Shares of Aviva and Direct Line, RSA and Lloyds of London member Hiscox fell between 3.8 per cent and 7.9 per cent after saying they were cancelling 2019 investor payouts.

Tesco, Britain’s biggest retailer, fell 0.6 per cent as it forecast costs from the pandemic of up to £925 million and warned it was unable to give a profit forecast for the current year. Fellow retailers Sainsbury and Morrison fell 4 per cent and 0.8 per cent, respectively.

Online fashion retailer Asos soared 28 per cent after saying it had raised £247 million via a placing, to help it shore up its finances against any prolonged business downturn.

Recruiter PageGroup rose 5.7 per cent after it said it would shed another 250 staff in April and cut directors’ pay by 20 per cent in efforts to ride out the health crisis.

The pan-European Stoxx 600 index ended up 0.02 per cent, reversing earlier losses of as much as 1.5 per cent.

Energy, mining, insurers and bank stocks were among the biggest decliners. Defensive real-estate stocks gained 1.4 per cent, while travel and leisure led with a 3.3 per cent rise.

Sources said carmaker Renault’s board might consider suspending its dividend, while miner Rio Tinto said it would press ahead with its own payout.

The pan-region benchmark index has gained about 20 per cent since hitting an eight-year low on March 16th, boosted by aggressive global stimulus measures, but remains 25 per cent below its all-time high.

The chairman of the euro-zone finance ministers, Mario Centeno, suspended talks on a half-trillion-euro package until Thursday, sending the 10-year Italian bond yield to its highest since March 19th.

Tesla and Boeing supplier Spirit AeroSystems became the latest companies to furlough workers as the pandemic forces the closure of US production facilities.

Corporate earnings season starts next week with the major companies and Wall Street banks expected to outline more drastic measures as they look to bolster dwindling cash reserves. Analysts now expect first-quarter earnings for S&P 500 companies to fall 7.5 per cent compared with a January 1st forecast for a rise of 6.3 per cent.

Shares of UPS and FedEx rose 3.51 per cent to 6.26 per cent after Amazon. com said it would suspend its US shipping service. – Additional reporting: Reuters