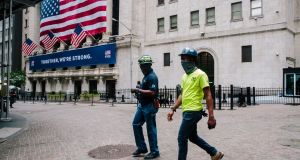 European equities drifted on Wednesday ahead of a monetary policy decision from the US Federal Reserve, while the Chinese currency touched a fresh 16-month high against the dollar.

Following gains for both Wall Street indices on Tuesday, futures contracts indicated the S&P 500 and the Nasdaq would nudge higher at the start of New York trading. Futures contracts on the tech-focused Nasdaq 100 rose 0.3 per cent while those on the broad-based S&P 500 index gained 0.2 per cent.

Those moves came ahead of a US central bank decision that will be closely watched by investors for signs of renewed stimulus measures.

The Federal Open Market Committee will meet on Wednesday for the last time before the US presidential election. It is also the first time since it embraced a new monetary strategy that will be more tolerant of higher inflation and more committed to promoting full employment as the economy grapples with the effects of the coronavirus pandemic.

“One of the highlights of this week’s Fed policy meeting is likely to be greater clarity on the implementation of the shift toward an average inflation target,” said Mark Haefele, chief investment officer at UBS Global Wealth Management.

“The move will make it easier for the Fed to tolerate moderately higher levels of inflation” before having to rein in its monetary stimulus, in a move that should be supportive to equity markets, he added.

Also on Wednesday, China’s policymakers permitted the nation’s tightly controlled currency to strengthen by a further 0.3 per cent, building on gains it had made on Tuesday to hit a fresh 16-month high of Rmb6.7613 per dollar.

Demand for the renminbi has been strengthened by flows of dollars into the country, according to analysts at Japanese bank Nomura. This is partly because Chinese exporters – who have some choice over whether they leave their dollar revenues abroad or take them back into China to convert to renminbi – are bringing more foreign currency home.

This comes after China’s economy improved in recent months, as coronavirus cases faded and the nation’s government eased its strict lockdown and quarantine rules. China’s retail sales grew in August, official data released on Tuesday showed, for the first time this year.