US closes down 4% as Iseq also retreats 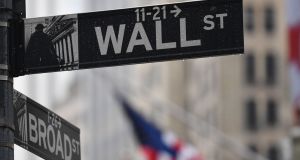 US stocks closed more than 4% lower on Wednesday

Global equity markets sold off heavily in the first trading session of the new quarter as investors digested a series of grim predictions about the human and economic toll of the coronavirus pandemic.

US stocks closed more than 4 per cent lower on Wednesday, and debt markets signalled renewed concern about the creditworthiness of corporate and local government borrowers, despite the passage of a $2 trillion (€1.8 trillion) economic stimulus that had encouraged investors in the final days of March.

The Iseq index, which slid about 30 per cent in the first quarter of the year, dropped 3.2 per cent, while the pan-European Stoxx index declined by 2.4 per cent after Mr Trump struck an unusually sombre tone in a briefing on Tuesday evening, warning of a “painful” two weeks ahead.

The flight from risk assets followed the worst quarter for markets since the 2008 financial crisis, and came after Mr Trump warned late on Tuesday that up to 240,000 people could die in the US from Covid-19.

Data on the number of Americans claiming unemployment benefit, due on Thursday, are expected to show a figure even worse than last week’s 3.3 million.

The S&P 500 closed down 4.4 per cent, with banks and airlines among those hardest hit.

The tech-heavy Nasdaq Composite also fell 4.4 per cent, and the Russell 2000 index of small-cap stocks – which are more exposed than larger companies to the domestic US economy – was more than 7 per cent lower.

“Every time you get a data point suggesting the pandemic will be longer, people flock back to defensive stocks,” said Jim Tierney, the chief investment officer of concentrated US growth at AllianceBernstein. “The sentiment change out of the White House briefing even from just four or five days ago is very noticeable.”

The yield on 10-year US Treasuries slipped 0.05 percentage points to 0.62 per cent. Yields fall as bond prices rise.

Earlier on Wednesday, European and most Asian equity markets had also closed lower. Paris’s CAC 40 fell 4.3 per cent, and London’s FTSE 100 was down 3.8 per cent.

The UK’s biggest banks sold off after saying they would scrap billions of pounds worth of dividends under pressure from the country’s top financial regulator. Shares in HSBC were down more than 9 per cent on Wednesday. Barclays and Lloyds Banking Group were both down nearly 12 per cent.

US banks followed their European counterparts lower, with the KBW bank index, one of the most widely tracked measures of the performance of the US banking sector, down 6.9 per cent. Citigroup shares were down 8.6 per cent.

Sentiment on banks has soured as low interest rates put pressure on net interest margins and investors worry about defaults on mortgages and loans.

Bond markets reflected the rising concern about the financial health of borrowers, with heavy selling of junk bonds on Wednesday. Shares in a popular high-yield exchange-traded fund, HYG, were down almost 3 per cent.

Volatility also returned to the $4 trillion municipal debt market, where US states and cities raise cash. Yields on highly rated debt maturing in 10 years soared 30 basis points, while 30-year debt saw yields climb 50bp – swings that are uncommon for a typically staid market viewed by investors as a safe haven, at least until coronavirus put local governments on the front line of an expensive health emergency.

Global markets on Wednesday also had to digest gloomy surveys of business executives in the euro zone, Japan and South Korea, which reported a marked deterioration in the factory sector in March.

He added that “the prospect for most economies’ manufacturing sectors as they head into the second quarter is for even more weakness, exacerbated where lockdown measures are newly enacted or tightened”.

Global equities had rallied over the past week as investors rebalanced their portfolios after a painful month of trading. However, many have remained on the sidelines, shifting billions of dollars of capital to money market funds to avoid the broad stock market ructions that have cut the value of global indices by nearly a quarter this year.

“Investors and institutions have decided that holding cash is a better choice at the moment due to liquidity concerns,” said Randy Frederick, vice-president of trading and derivatives at Charles Schwab.

1 Should my mam wait for house prices to drop before buying?
2 Brother is dragging his heels as executor of uncle’s will - is there anything I can do?
3 Covid-19 mortgage breaks: What’s the catch?
4 Revenue faces US drug company Perrigo over disputed €1.64bn tax bill
5 Coronavirus: Workplaces review office design with view to return
6 Almost 70% of home buyers to purchase within next year
7 Cheers: Conor McGregor's whiskey races up the sales chart
8 Dublin drops out of top 50 in ranking of best cities for start-ups
9 Covid-19 takeover of private hospitals to cost insurers €180m
10 ‘I’m so lucky to be in the Caribbean – a million miles from Derry Girls’
Real news has value SUBSCRIBE