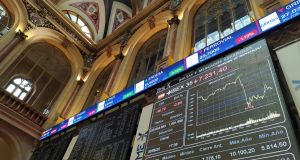 European stocks closed sharply lower on Thursday as Wall Street tumbled after another record surge in US coronavirus cases that raised fears of fresh lockdowns.

Dublin followed other indices into lower territory, closing down more than 1 per cent, with banks taking a major bashing.

Bank of Ireland declined 6 per cent, having dropped 3.5 per cent a day earlier. AIB was down 4.8 per cent with Permanent TSB 2.7 per cent lower.

Hibernia Reit, which on Thursday reported that just 5.5 per cent of rent due was unpaid during the Covid period, was down 3 per cent. Other housing-related stocks were also lower with Ires Reit losing 0.6 per cent and housebuilder Cairn down 1 per cent.

Other decliners included Smurfit Kappa, which closed 2.3 per cent lower and Ryanair down 1.7 per cent.

London’s FTSE 100 closed 1.7 per cent lower in its worst day since June 24th, with BP and Royal Dutch Shell among those bearing the brunt of the falls. The domestically-focused midcap index ended the day 1.2 per cent lower. Aerospace engineer Rolls-Royce fell nearly 11 per cent after it said it had burned through £3 billion in its first half as the Covid-19 pandemic halved the hours flown by its engines.

Telecommunication major Vodafone shed more than 2 per cent after it said it would cost “single-figure billions” of pounds to remove equipment made by Huawei, if the government were to demand that, as tensions mount between China and the West.

Home builder Persimmon jumped to the top of the FTSE 100 after data showed buyers returned to Britain’s property market last month after the easing of lockdowns.

Irish-founded Grafton Group rose 4 per cent after its latest trading update, which shows that underlying sales fell by an annual 1.1 per cent in June.

The main indices in Paris, Milan and Madrid fell between 1.2 per cent and 2 per cent, while Frankfurt-listed shares closed flat as software giant SAP jumped 4.6 per cent after confirming its full-year outlook. After hovering in positive territory until afternoon trading, the broader European index lost ground and closed down 0.8 per cent to hit a one-week low.

Technology stocks registered the only sector rise in Europe, up 0.9 per cent, while banks and utilities fell nearly 2 per cent. Investors are also awaiting the onset of second-quarter earnings season, with analysts predicting companies listed on the Stoxx 600 will record a near 54 per cent drop in profits, according to Refinitiv data.

Merck and Roche rose 1.7 per cent and 0.7 per cent respectively after Reuters reported the European Commission has struck deals with the drugmakers to secure supplies of experimental treatments for Covid-19.

US stock indices dropped in early trading on Thursday as fears of another lockdown to contain a surge in coronavirus cases overshadowed data pointing to a declining trend in weekly jobless claims.

Cyclical energy and financials lost the most ground among the 11 major S&P sectors trading in the red.

Walgreens Boots Alliance tumbled 9.5 per cent after it reported a quarterly loss compared with a profit a year earlier, hurt by non-cash impairment charges of $2 billion as Covid-19 disrupted business at its Boots division.

Demand for medicines lifts Irish goods exports 8% in first half 17:04
Anti-money laundering rules to be made law after State fined €2m for delays 16:58
Irish grass-fed beef could get special EU status 16:53
Virgin Media vows to withhold sports channels until Eir ‘pays its bill’ 16:51
Avoca warns of redundancies due to coronavirus 16:44