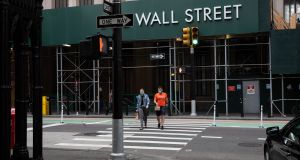 Solid earnings from Nike in the US lifted the European sportswear manufacturer stocks Adidas and Puma. Photograph: Michael Nagle/Bloomberg

European stocks rose in Wednesday’s session, as a rebound in beaten-down travel stocks and gains for Adidas took the edge off data that highlighted an uneven path for economic recovery in the euro zone.

The gains represented the second consecutive day of relief for investors after Monday’s sell-off triggered by rising cases of Covid-19 in Europe.

The Iseq index closed up almost 1 per cent in line with the trend across Europe. Ryanair added 0.9 per cent to €11.38 as most airline stocks edged upwards. Packaging giant Smurfit Kappa was also among the risers, finishing 1.4 per cent at €32.32.

But troubled Swiss-Irish bakery group Aryzta plunged 10 per cent to 54 cent following the upheaval of last week’s egm. Covid-hit hotel group Dalata also slipped, by 0.6 per cent to €2.47, while the banks were others among the fallers. Bank of Ireland fell about 3.6 per cent to just under €1.58 and AIB ending 1.5 per cent lower at 91 cent.

Weakness in sterling versus the dollar provided some support to the exporter-heavy FTSE 100 index, which outperformed other major markets in Europe to finish up 1.2 per cent. The more domestically focused mid-caps on the FTSE 250 rose 1 per cent.

Mining stocks Antofagasta and Glencore were down 1.5 per cent and 0.7 per cent respectively after negative trends in metal markets.

SSP Group, the owner of commuter-dependent food chains Upper Crust and Caffe Ritazza, added 12 per cent after it said the year-on-year decline in its weekly sales had eased.

JD Sports also had a good day, advancing 3.8 per cent on the back of an upbeat earnings release from US sportswear maker Nike.

International Consolidated Airlines Group (IAG), the owner of Aer Lingus, failed to join in the positive momentum for airline stocks, declining 1.4 per cent. Its newly retired chief executive Willie Walsh said on Tuesday that he did not see the industry “ever going back to the way it was”.

The benchmark European Stoxx 600 index finished the day up 0.55 per cent. In Germany, the Dax closed 0.4 per cent higher, while the French Cac 40 was up 0.6 per cent. Italian and Spanish stocks rose modestly.

Deutsche Lufthansa advanced 2.4 per cent after news the airline was planning to make rapid Covid-19 antigen tests available to passengers in October.

German footwear makers Adidas and Puma both jumped more than 4 per cent after Nike reported strong earnings and forecast better-than-expected sales for 2020.

Swiss drugmaker Roche slipped 1.8 per cent as its experimental Alzheimer’s drug failed to slow cognitive and functional decline in a trial.

Wall Street stocks dropped amid warnings from Federal Reserve officials on the need for more stimulus to lift the world’s largest economy from a coronavirus-induced recession.

The S&P 500 came off session lows, but was still trading lower at 6pm Irish time, led by declines for energy producers, retailers and technology companies. Fed chairman Jerome Powell reiterated that there is a long way to go for the economic rebound, which will likely require more support.

On corporate news, Tesla dragged down the Nasdaq 100 after its “Battery Day” event fell short of expectations. The Dow Jones Industrial Average outperformed on solid earnings from Nike, which soared more than 10 per cent, and a rally in Johnson & Johnson amid hopes for the first big US trial of its Covid-19 vaccine. – Additional reporting: Bloomberg/Reuters