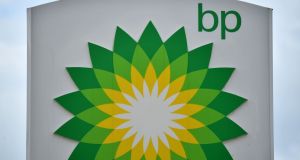 BP: Among the biggest drags on the FTSE on Friday. Photograph: AFP via Getty

European stocks paused on Friday after gains through the week as another record surge in US coronavirus cases dulled optimism from a brisk recovery in China’s services sector.

Dublin finished the week lower with the Iseq index down 1.1 per cent with most stocks falling into the red.

Ryanair, which announced on Friday that Irish pilots had agreed a pay cut, and confirmed that it, British Airways and Easyjet were ending a legal challenge against the British government over its quarantine policy, was among the fallers. It closed down almost 1 per cent at €10.91.

UK stocks ended lower on Friday, with the FTSE 100 index wiping out gains for the week as a record surge in US coronavirus cases made investors question the chance of a swift global economic recovery.

The blue-chip FTSE 100 slid 1.3 per cent, with BP and Royal Dutch Shell among the biggest drags, as the new infections raised the spectre of further lockdowns and hit oil prices. The domestically-focused FTSE 250 fell 0.4 per cent on the day, but still held on to a weekly gain.

Shares in Rolls-Royce, which have lost 57 per cent of their value since the beginning of the year, extended losses to trade down 10 per cent after it said it was reviewing a range of options to strengthen its balance sheet and position itself for recovery after the pandemic.

Land Securities was up 0.5 per cent after it said like-for-like sales at its shopping centres was at 80 per cent of the level achieved last year in the two weeks since non-essential retail reopened in England.

Providence Resources was up 3.4 per cent in London after it appointed a British industry veteran and expert on its Barryroe project to its board.

Engineering company Meggitt slumped 4 per cent having risen by more than 6 per cent a day earlier after it said there were initial signs of a recovery in airline industry demand after a difficult first half.

The pan-European Stoxx 600 index was largely flat after opening marginally higher, with trading volumes thinned by a US market holiday.

The benchmark index was headed for a 2.8 per cent weekly gain as hopes of a vaccine and a series of strong data pointed to a global economic recovery from the health crisis.

But investors are sceptical of further gains in equities as the United States set a new daily global record for cases on Thursday, driving several US states to delay their reopening plans.

Paris’s blue-chip CAC 40 slipped 0.3 per cent as French prime minister Edouard Philippe resigned ahead of a government reshuffle by President Emmanuel Macron designed to win back disillusioned voters ahead of a possible re-election bid.

US markets were closed on Friday for a public holiday.