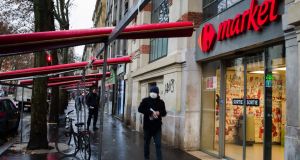 Banks, travel companies and automotive industry stocks fell the most on fears that prolonged restrictions in Europe to control soaring coronavirus cases will further slow a recovery in earnings and economic growth.

The Iseq weakened over the course of the trading session and finished 1.3 per cent lower, underperforming the major European indices on the day. Cement-maker CRH, the largest stock on the index, was among the fallers, declining almost 1.7 per cent to €36.62.

The banks managed to stay in positive territory, while Cairn Homes advanced 1.2 per cent to €1.04, with Glenveagh Properties up 1.8 per cent at 86 cent. Packaging company Smurfit Kappa also finished in the green, closing at €41.04, up 0.5 per cent.

Just Eat Takeaway fell 4.1 per cent as disappointing 2020 margin guidance overshadowed a 57 per cent jump in fourth-quarter orders, although online grocery company Ocado had a good session, rising 3.5 per cent.

The London Stock Exchange Group gained 1.8 per cent after EU antitrust regulators gave the green light for its $27 billion takeover of Refinitiv.

Online fashion retailer Asos also rose, its shares advancing 2 per cent after it predicted the pandemic would boost its profits as it had experienced strong lockdown demand and lower levels of customer returns.

In Germany, the Dax added 0.1 per cent, while the Cac 40 in France climbed 0.2 per cent, led by gains for Carrefour. The supermarket giant’s shares rose 13.4 per cent to their highest level since August 2019 after a surprise €16.2 billion takeover approach from Canadian convenience store operator Alimentation Couche-Tard. Shares in French rival Casino rose 3.9 per cent.

Investors were keeping an eye on political developments in Rome after former prime minister Matteo Renzi threatened to pull his tiny centrist party out of the ruling coalition. Italy’s current premier Giuseppe Conte told reporters he was working on a new coalition pact to last until the end of the legislature.

Italian banks fell after JP Morgan cut its forecasts for Italy’s economy, predicting that longer restrictions will result in no growth in the first quarter.

On Wall Street, the Dow Jones, S&P 500 and Nasdaq all rose in early trading. Tech stocks advanced, supported by a change in leadership at chipmaker Intel, which soared more than 8 per cent after announcing that Pat Gelsinger would take over as chief executive from mid-February.

Amazon. com, Apple and Netflix all rose, though it was a more subdued start to trading for recent stock soaraway Tesla, which traded more than 1 per cent lower.

Tesla chief executive Elon Musk was reported to have spurred a 4.4 per cent rise in Tokyo for Japanese toy and game maker Bandai Namco Holdings. Mr Musk tweeted a meme that featured a character from the company’s Idolmaster franchise.