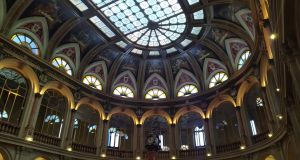 The Spanish stock exchange. The Stoxx 600 fell 0.5 per cent in early trading. Energy and financial shares prospered, while healthcare and technology stocks were the worst-performing sectors.

European stocks provided a mixed picture on Tuesday, with the region’s tech stocks faring worst after a rough day on Wall Street for the sector.

The region-wide Stoxx 600 fell 0.5 per cent in early trading. Energy and financial shares prospered, while healthcare and technology stocks were the worst-performing sectors.

Despite Monday’s release of a road map out of England’s lockdown, the slower rollout of Covid-19 vaccines on the continent continued to cloud market sentiment, said strategists.

“In mainland Europe, investors are worried about the prospect of multiyear lockdowns - what people fear is a shock to growth,” said Nadège Dufossé, head of cross-asset strategy at fund manager Candriam. Investors, she added, were also “anticipating the Fed’s reaction to an increase in inflation expectations”.

Federal Reserve chair Jay Powell goes before Congress on Tuesday and Wednesday to give his semi-annual update on monetary policy. Investors are keen for any hints on whether rising inflation could push the US central bank to shift from its ultra-loose stance.

The Treasury market was stable on Tuesday, with the yield on the benchmark 10-year bond steady at 1.38 per cent, after a marked sell-off for the debt this year as inflation expectations have risen.

Traders will get another clue on whether those inflation concerns are justified on Friday, with the release of the latest official US inflation data.

“The reality today is that inflation is a risk - core government bond yields are rising as markets reprice for better future growth,” said Kerry Craig, a global market strategist at JPMorgan Asset Management. “But some inflation may not be a bad thing, and the recovery has a long way to go before it becomes a problem.”

China’s CSI 300 index of Shanghai and Shenzhen-listed stocks lost another 0.3 per cent, a day after the benchmark suffered its biggest one-day drop in more than six months. The sell-off was prompted by concerns that the country’s rapid economic recovery from the Covid-19 pandemic could bring on the removal of policy support for asset prices.

In US trading on Monday, the S&P 500 shed 0.8 per cent while the tech-focused Nasdaq Composite tumbled 2.5 per cent. Shares of Facebook, Amazon, Apple, Netflix and Google parent Alphabet all fell in what some investors suggested was the beginning of an overdue correction.