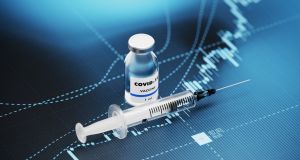 European shares opened lower on Thursday after gains spurred by advances in vaccines to fight Covid-19, but data across Europe underscored the economic damage still being caused by the pandemic.

Markets were keeping an eye on talks between Britain and the European Union on a trade deal, with less than a month to go before the UK’s full departure from the EU.

Global stocks reached record highs, sending the dollar lower as investor appetite for riskier assets was whetted by news that Britain would start rolling out a COVID-19 vaccine next week, lifting prospects for economic recovery.

The dollar index slipped to a two-and-a-half-year low of 90.948 on Thursday and was last at 90.968. The MSCI’s gauge of stocks across the globe hit another record high.

“The UK stole a march on the rest of Europe and we had a little bit of a feel-good factor yesterday. I am a lot more optimistic about equity markets than I was a month ago,” said Michael Hewson, chief market analyst at CMC Markets.

The Stoxx index of European companies was flat, dragged down by a 0.2 per cent drop in Frankfurt and Paris blue chips. The Ftse 100 hit June highs.

Investors hope that a fresh round of weak economic data in Europe and the United States will finally persuade policymakers to agree the stimulus packages that have so far eluded them.

There is still no deal yet in the US Congress on a $908 billion boost to the world’s biggest economy, and the EU has yet to nail down an economic package agreed in principle as the euro zone economy struggles.

The IHS Markit Purchasing Managers’ Index (PMI) for November in Spain shrank to 39.5 - below the 50 level separating growth from contraction. Italy’s services contracted for a fourth month running, with the IHS Markit Business Activity Index for services dropping to 39.4.

CMC’s Hewson said such figures were “abysmal” and likely to remain below 45 until January.

Euro zone government bonds held ground on Thursday with Germany’s 10-year bund yield down about 1 basis point to -0.53 per cent.

Britain’s education minister, Gavin Williamson, said good progress was being made in talks with the European Union on a trade deal as the Brexit deadline approaches. Irish Foreign Minister Simon Coveney said he believed there was a good chance of a deal within days.

Sterling clung on to $1.34 thanks to broad dollar weakness, but derivative markets were flashing red on doubts that Britain can strike a Brexit trade deal with the EU before the UK’s exit from the single market on December 31st.

Asian shares were mixed on Thursday after a choppy day of Wall Street trade, thanks in part to a disappointing US jobs report.

The US Food and Drug Administration is holding its advisory committee meeting next week, while New York Governor Andrew Cuomo has said the state’s first vaccine delivery, enough for 170,000 residents, is expected on December 15th.

Hopes that the pandemic will finally be brought under control sparked a risk-on rally in currency markets with the Australian and New Zealand dollars advancing.

In Asia, Japan’s Nikkei was unchanged while South Korea’s KOSPI and Australia’s benchmark index were about 0.4 per cent higher each. Chinese shares opened lower, with the blue-chip CSI300 index off 0.2 per cent. New Zealand shares were weaker, too.

In commodities, oil prices slipped on Thursday as producers including Saudi Arabia and Russia locked horns over the need to extend record production cuts set in place in the first wave of the Covid-19 pandemic.