European shares fall on coronavirus fears and signs of US slowdown 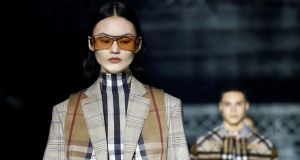 Luxury goods maker Burberry closed 2.58 per cent down in London, recovering slightly from lows that saw it lose as much as 3 per cent of its value. Photograph: Henry Nicholls/Reuters

Signs of a US slowdown and a rise in coronavirus cases sent European shares falling on Friday.

Kingspan added 0.63 per cent after publishing results showing that profits grew to a record €497 million last year. Dealers pointed out that its shares had enjoyed a strong run recently and remarked that the stock did well to hold on to these gains.

Ryanair shed 0.52 per cent to €15.30, performing better than others in its industry, particularly those with significant long-haul businesses, which investors believe could suffer if the coronavirus outbreak worsens.

Luxury goods maker Burberry tumbled as much as 3 per cent as analysts warned that the listed company known for its check-patterned scarves and handbags was “disproportionately” exposed to fallout from the coronavirus outbreak.

Burberry’s growth plans focus on the Far East, particularly China, where the outbreak was first detected. Its shares closed 2.58 per cent down at 1,870.5 pence sterling in London on Friday, recovering slightly from lows that saw it lose as much as 3 per cent of its value.

Analysts at stockbrokers Jefferies International downgraded the stock, while Bloomberg Intelligence pointed out that it had the heaviest exposure of any European luxury goods manufacturer to China.

Aer Lingus and British Airways owner International Consolidated Airlines Group shed 1.39 per cent to 623p on a day when airlines suffered as investors remained wary of any companies likely to suffer if the outbreak continues or worsens.

Dundrum Town Centre owner, shopping mall operator Hammerson, saw shares dip after it sold the last of its retail parks for £455 million, in its largest disposal in the last decade.

The business said it had sold sites from Falkirk in Scotland to Merthyr Tydfil in Wales and Didcot in England. Shares closed 3.7p or 1.6 per cent lower at 222p.

Elsewhere, Royal Mail shares fell after it announced plans to increase the price of first-class and second-class stamps. It said the price change, which will be implemented next month, is “necessary” to ensure the sustainability of its universal service. Shares were down 4.1p or 2.2 per cent at 178.4p.

Model train company Hornby saw shares rise after it tapped investors to raise £15 million in its latest fundraising effort. Shares were up more than 6 per cent at 38.5p at the end of play.

Packager Mondi, one of Smurfit Kappa’s competitors, bucked the trend in its industry by gaining 1.21 per cent to 1,717p.

Air France KLM retreated 3.3 per cent to €9.08 as its industry continued to suffer coronavirus woes. Similarly, German airline group Lufthansa was down 1.33 per cent at €14.82.

Among technology stocks, software firm SAP lost 1.3 per cent while chipmakers AMS AG, STMicroelectronics and ASML all fell more than 0.9 per cent.

Auto stocks led losses, down 1.9 per cent in their worst session in four weeks. With losses of more than 8 per cent so far this year, the sector is the worst performing among major sectors in Europe, steepening losses since the outbreak as Hubei – the epicentre of the coronavirus epidemic in China – is an auto manufacturing hub.

US stock indices fell on Friday after data showed business activity stalled in February, and a spike in new coronavirus cases in China and elsewhere sent investors scrambling for safer assets such as gold and government bonds.

The S&P technology index dropped 1.5 per cent. Chipmakers, heavily reliant on China for their revenue, also took a beating, with the Philadelphia Semiconductor index falling 1.9 per cent. – Additional reporting: Reuters