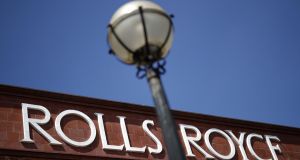 Rolls-Royce tumbled nearly 15 per cent to the bottom of the FTSE 100 as Standard & Poor’s cut its credit rating to junk. Photograph: Bloomberg

European shares fell on Friday as investors fretted about US president Donald Trump’s response to China tightening its control over Hong Kong.

The pan-European Stoxx 600 index fell 1.4 per cent, with sectors that had been well bid for most of the week, including travel and leisure, banks and automakers, leading the decline. Friday’s losses reduced the European market’s gain for the month of May to 3 per cent.

“Global equities had been willing to look past the risk of escalating US-China tensions over recent weeks because the threats had largely been confined to mere sabre-rattling,” said Han Tan, market analyst at FXTM.

“That Trump rhetoric is set to evolve into actual policies, potentially in the form of sanctions, which could shatter the stability that the world sorely needs in these early days of the post-pandemic era.”

Banking stocks were among the worst performers as bond yields – or market interest rates – headed lower as investors piled into so-called safe haven assets. There is an inverse relationship between bond prices and yields and banks’ income tend to come under pressure in a low-yield environment.

Flutter Entertainment declined by 2.5 per cent to €115.30 as the market absorbed the gambling giant’s sale of €900 million of new shares as it seeks to bolster its balance sheet after a major merger deal earlier this month – and as it looks to take advantage of likely investment opportunities in the US.

The blue-chip FTSE 100 ended the session down 2.3 per cent with travel stocks serving as the top decliners, while the mid-cap FTSE 250 shed 1.7 per cent to snap a nine-day winning streak.

Still, the two indexes gained for the month as investors continued to bet on a bounceback in economic growth from coronavirus.

Rolls-Royce tumbled nearly 15 per cent to the bottom of the FTSE 100 as Standard & Poor’s cut its credit rating to junk on the disruption to global air travel from the pandemic.

Coffee maker JDE Peet’s BV, one of the few big companies to go public during the coronavirus crisis, jumped 13.8 per cent on its market debut in Amsterdam, valuing it at €15.6 billion

Among decliners, Hugo Boss fell 9.1 per cent after Jefferies downgraded the stock to “hold”, saying its performance improvement will be derailed by two years due to the pandemic.

Renault slid 7.7 per cent on news it was launching talks with unions to restructure several French car plants and confirmed plans to cut around 15,000 jobs worldwide.

Wall Street’s main indexes were also lower in mid-afternoon trading as investors monitored tension between Washington and Beijing. Adding to the downbeat mood, economic data showed US consumer spending suffered another month of record decline in April, buttressing expectations that the economy could contract in the second quarter at its steepest pace since the Great Depression.

A day after Mr Trump signed the order threatening social media firms with new regulations over free speech, Twitter hid a tweet from the president and accused him of breaking its rules by “glorifying violence”. Shares in Twitter and fellow social media group Facebook fell.

Salesforce. com shares were also out of sorts as the cloud-based business software maker cut its annual revenue and profit forecasts.

1 My aunt never told us that Gran passed away with no will
2 Ryanair to slash 1,000 flights from August and September schedules
3 Green Party TD queries ‘usefulness’ of another appeal in €13bn Apple tax case
4 The $6bn judgment pitting Nigeria against Irish businessmen
5 If it’s safe to do so, could this be the time to spend for Ireland?
6 Government to push through €2bn credit guarantee scheme next week
7 Majority of employees don’t want to return to pre-Covid working patterns
8 Burger King to sell whoppers from cows that belch out less methane
9 Covid anxiety among domestic holidaymakers could sink this summer
10 Costs and borrowing rules locking a generation out of home ownership, builder warns
Real news has value SUBSCRIBE