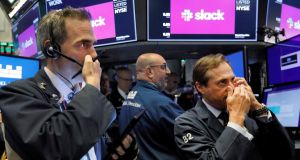 European stocks posted their worst fall in three months on Monday as fears of a second wave of Covid-19 infections hit travel and leisure shares, while banks tumbled on a report of about $2 trillion worth of suspect transfers by leading lenders.

There could be up to 50,000 new coronavirus cases per day in Britain by the middle of October if the pandemic continues at its current pace, the country’s chief scientist adviser has warned. On Sunday, health minister Matt Hancock said a second national lockdown was possible.

“We suspect equities would fall sharply and indiscriminately, similar to what happened in February-March or in June ... if the rise in new cases in Europe seriously undermined the global economic recovery,” said Simona Gambarini, markets economist at Capital Economics.

London’s Ftse 100 was the worst-hit blue chip index in Europe, falling about 3.4 per cent.

Dublin’s Iseq was hit hard, falling 3.5 per cent to 6,253, one of its largest daily falls in weeks. Ryanair fell 5 per cent as the outlook for Europe’s travel sector darkened again with several countries facing further Covid restrictions or the possibility of another lockdown.

The worsening economic outlook hit financial stocks here, with Bank of Ireland and AIB down 3.7 per cent and 5 per cent respectively. Swiss-Irish baked goods giant Aryzta fell a further 4 per cent to 61 cent as investors speculated on whether a deal to sell the group was still on after last week’s boardroom coup.

The potential reimposition of restrictions also a proved a negative for the home builders Glenveagh and Cairn Homes, which fell 4 per cent and 3 per cent.

Building materials group CRH was down 6 per cent at €29.94 while insulation specialist Kingspan dropped 1.3 per cent to €73. Food giant Glanbia was one of the few risers, increasing 4 per cent to €8.74. Packaging firm Smurfit Kappa was down 4.5 per cent to €31.78.

The Ftse 100 plunged to its worst day in three months on the back of fears that a second wave of Covid-19 would force the government to launch harsh lockdown measures.

All but four firms in the top index closed in the red as traders witnessed the index hit a four-month intra-day low before recovering marginally later in the session. Shares in hospitality and leisure firms were particularly dented by the rapid sell-off.

London’s top flight closed 202.76 points lower at 5,804.29 at the end of trading on Monday. Airline and pub stocks were particularly hard hit by lockdown fears, with British Airways owner IAG hitting the foot of the Ftse, while Mitchell & Butlers and JD Wetherspoon both plunged in value.

The pan-European Stoxx 600 was down 3.2 per cent, a fall not matched since early June. Europe’s travel and leisure index fell 5.2 per cent, its worst two-day drop since April, with airlines such as Lufthansa down 9.5 per cent.

European banks slumped 5.7 per cent to hover near record lows after lenders including HSBC and Standard Chartered were named in a cache of leaked documents that said they had transferred large sums of suspect funds over the past two decades.

HSBC’s shares in Hong Kong and Standard Chartered’s in London fell on Monday to their lowest since at least 1998. Barclays and Deutsche Bank, which were also mentioned in the report, slipped 5.4 per cent and 8.8 per cent, respectively.

Wall Street’s main indexes hit their lowest in nearly seven weeks on Monday as concerns about fresh coronavirus-driven lockdowns and a stalemate in Congress over more fiscal stimulus raised fears about another hit to the domestic economy.

JPMorgan Chase and Bank of New York Mellon fell 4.4 per cent and 4.9 per cent, respectively, on reports that several global banks moved large sums of allegedly illicit funds over nearly two decades despite red flags about the origins of the money.

The S&P banking subindex lost 4.3 per cent. Nikola Corp crashed 20.3 per cent after its founder, Trevor Milton, stepped down as executive chairman following a public squabble with a short-seller over allegations of nepotism and fraud.

General Motors, which took an 11 per cent stake in Nikola for about $2 billion earlier this month, slipped 6.7 per cent. Airline, hotel and cruise companies tracked declines in their European peers as the UK signalled the possibility of a second national lockdown.