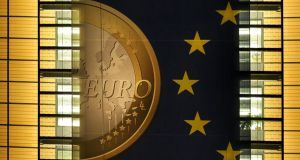 For all the uncertainty over Greece, European equities overall are set for their best week since January

The trading day looked set to be dominated by US inflation data due later as well as General Electric’s earnings.

The earnings season is only just getting underway in Europe, with Friday’s batch of results bringing forecast-beating numbers from mobile network supplier Ericsson, appliance maker Electrolux and Swiss fragrance firm Givaudan. Their shares rose 3 to 5 per cent.

Shares in truck maker Volvo dropped 4 per cent, however, after Volvo warned that its market conditions were probably reaching a peak in north America.

The EuroSTOXX 50 index was down 0.1 per cent, giving up some of its gains from the previous session that were fuelled by fresh expectations for a Greek debt deal and more European Central Bank help for Greek banks.

“The earnings announcements are mixed and there is a little bit of an anticlimax after the Greece headlines. A lot of people did not expect the worst to happen and so money had already poured in,” said Markus Huber, trader at brokerage Peregrine & Black.

For all the uncertainty over Greece, European equities overall are set for their best week since January. Europe and North America were the only regions that saw net inflows over the past week, with equity inflows into Europe rising to $4.1 billion, according to Jefferies.

And while the profit-enhancing falls in the euro and oil prices seen earlier this year are expected to have worked less of their magic on company earnings in the second quarter than in the first, European firms are seen reporting an estimated 5-per cent increase in second-quarter profits.

“Unless the ECB firewall breaks and contagion spreads violently across the euro zone, there is upside to European equities over the next 12 months even with our Grexit base case,” Citi strategists wrote in a note.

The FTSEurofirst and Euro STOXX 50 indexes are both up by nearly 20 per cent in 2015.