Deloitte was top Irish dealmaker in first half of this year

Big Four firm advised on eight deals, worth a combined $556m in the first six months of 2020, topping the league table here 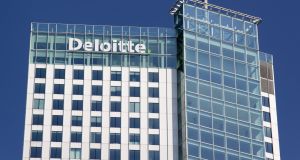 A Deloitte office in the Netherlands. The firm’s Irish member topped the league table of corporate deals for the first half of this year.

Accountants Deloitte led the way in advising on corporate dealmaking in the Republic in the first half of this year, new figures show.

Covid-19 sent European mergers and acqusitions plunging to an 11-year low of $83.6 billion (€74 billion) in the three months ended June 30th, according to the latest Mergermarket Financial report.

The firm’s figures also show that in the Republic, Deloitte advised on eight deals, worth a total of $556 million in the first half of 2020, topping the league table here.

Jefferies came second, advising on two deals with a combined price tag of $488 million while Davy Corporate Finance was third, also with two transactions, worth $140 million in all.

The $83 billion spent on European businesses in the second quarter of the year was the first time that the total failed to breach the $100 million-mark over a three-month period since 2009, Mergermarket’s report says.

This pushed the total value of European deals in the first half of the year down to $291.5 billion , 30 per cent below the $420 billion that mergers and acqusitions in the region registered during the same period in 2019.

“Amid severe economic contraction, companies have been reluctant to part with any large-sums of money in recent months, with only 19 deals valued above $1 billion announced in the second quarter of the year,” Mergermarket says. “In contrast, 37 such deals occurred in the opening three months of 2020.”

The firm adds that the Organisation for Economic Co-operation and Development is forecasting severe falls in gross domestic product - a measure of the wealth a country creates - across Europe.

France, Italy and the UK, one of the Republic’s biggest trading partners, are all projected to suffer economic falls of more than 10 per cent this year as a result of the coronavirus outbreak.

Technology continued to draw buyers’ interest with the industry accounting for close to 19 per cent of all European deals in the second quarter, against 14 per cent during the comparable three months in 2019.

Globally, deal values collapsed by more than half to $901 billion in the first ahlf of the year from $1.9 trillion during the same period in 2019.

Mergermarket notes that worldwide mergers and acquisitions fell to levels not seen since 2008 and 2009, when a collapse in financial markets sparked a recession.

“And while the global financial crisis remains the best historical comparison, Covid-19 has generated its own unique brand of mayhem,” the firm adds.