On the Iseq, Ryanair, CRH and AIB advance while Smurfit Kappa falls nearly 4% 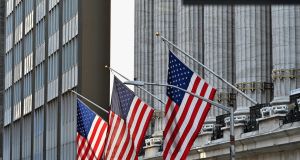 Wall Street rose after a record-setting increase in monthly US jobs pointed to a rebound in business activity following the easing of coronavirus-led lockdowns. Photograph: Angela Weiss/AFP via Getty Images

Growing coronavirus vaccine hopes and positive jobs news from the US boosted markets on Thursday.

Ryanair climbed 2.86 per cent to €10.97 on news that the UK government intended further easing quarantine rules, boosting travel stocks. The UK is one of the Irish group’s biggest markets. It also emerged that Irish-based cabin crew at the airline were voting on a deal reached with their trade union Fórsa.

Packaging maker Smurfit Kappa fell 3.74 per cent to €28.34. Shares in UK rival DS Smith fell more than 7 per cent despite the company reporting a double-figure increase in sales.

In the same industry, insulation specialist Kingspan, climbed 1.53 per cent to €59.70.

Good news from the US and investors’ positive mood would have aided both companies’ shares.

House builder Cairn Homes added 4.83 per cent to 89 cent. Rival Glenveagh Properties ended the day 3.5 per cent ahead on 71 cent.

Commercial property player Hibernia Real Estate Investment Trust was up 0.72 per cent at €1.122.

Penneys owner Associated British Foods climbed 4.15 per cent to 2046 pence sterling after saying that trading in its stores, known as Primark outside the Republic, had been “re-assuring and encouraging”.

Reports claiming that the British government intended ending quarantine rules for passengers arriving from 75 countries boosted travel stocks by 2 per cent overall on Thursday on the London market.

Engineering group Meggit, which makes parts for aircraft, jumped 6.2 per cent to 324p after reporting that it was seeing signs of increased demand from airlines.

European markets traded up as Pfizer and Biontech said they had seen positive results in trials of a potential Covid-19 vaccine. Most indices rose, Paris’s Dac ended the day up 2.5 per cent while Frankfurt’s Dax was up 2.8 per cent.

Air France KLM rose 2.41 per cent to €4.17 as airlines performed well in many markets.

Wall Street rose on Thursday, with the Nasdaq hitting an all-time high, after a record-setting increase in monthly US jobs pointed to a rebound in business activity following the easing of coronavirus-led lockdowns.

The US economy created 4.8 million jobs in June, the most since the government began keeping records in 1939, but lay offs remained high.

The Nasdaq and S&P 500 were also boosted on Thursday by a 1.5 per cent rise in shares of Microsoft Corp. The tech giant was the most invested in stock globally on the eToro trading platform in June.