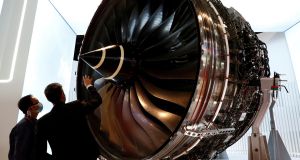 Rolls-Royce in May unveiled plans to cut 9,000 jobs by next summer, targeting annual savings of £1.3bn. Photograph: Reuters

ValueAct, a California-based activist investor, has sold out of Rolls-Royce as the UK aero-engine maker contemplates raising £1.5 billion to £2 billion (€1.66bn to €2.2bn) from shareholders to help restore a coronavirus-ravaged balance sheet.

The activist, which built a 10 per cent stake in Rolls-Royce in 2015 after it issued a string of profit warnings, has exited the FTSE company almost five years after becoming its biggest shareholder, said two people with knowledge of the situation.

The departure of the San Francisco hedge fund, which has been Rolls-Royce’s biggest shareholder for most of the past five years, comes amid one of the worst downturns in the aerospace industry’s history. But it also signals frustration over progress at a group that has for the last six years been caught up in serial restructuring, according to insiders.

Meanwhile, existing investors are pushing back against a rush to raise funds after the shares this week hit their lowest in more than a decade. Several investors have indicated they would prefer to wait until the end of the year when they said Rolls-Royce can show it has stemmed the cash outflow, forecast to hit £4 billion this year.

“If people are comfortable that, going forward, the cash flow is turning positive then the discussions will become a lot easier,” said a top shareholder. “They will have stopped the bleeding and... the dilution wouldn’t be as high.”

ValueAct will not be there to take part, however. The activist began reducing its stake – which peaked in 2017 at 10.9 per cent – after the departure of its chief operating officer Brad Singer from Rolls-Royce’s board in December.

The disposals were made when Rolls-Royce’s shares were trading between 250p and 350p, compared with a range of between 480p and 980p between January and the end of November in 2015, when the activist was building its initial stake.

Rolls-Royce shares closed at 253.1p in London on Thursday after hitting an 11-year low of 212p on Monday.

The group has said it is considering options to shore up its balance sheet, and reports suggest it could announce a rights issue as early as the end of the summer.

Yet with the share price at historic lows, many investors are reluctant to be heavily diluted. They would prefer the company first to deliver on its cost-cutting programme. Rolls-Royce in May unveiled plans to cut 9,000 jobs by next summer, targeting annual savings of £1.3 billion.

However, advisers are urging the company to move quickly before a wave of equity issues from others in the sector soaks up investor appetite, said two people with knowledge of the situation. – Copyright The Financial Times Limited 2020