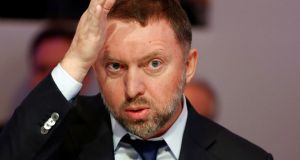 Oleg Deripaska’s aluminium-to-energy group En+ has presented the final version of a plan to the US Treasury in a bid to free itself from sanctions. Photograph: Ruben Sprich/Reuters

Oleg Deripaska’s aluminium-to-energy group En+ has presented the final version of a plan to the US Treasury in a bid to free itself from sanctions, which threaten to sink the company and upend global metal markets.

Under the proposal, which has been filed with the Office of Foreign Assets Control (Ofac), Mr Deripaska has agreed to reduce his holding in London-listed En+ to below 45 per cent from around 70 per cent currently, primarily through the transfer of shares to VTB, a Russian bank with close links to the Kremlin.

The plan, which has not yet been approved by Washington, represents a major concession to the US following its unprecedented move in April to try to end Mr Deripaska’s ownership of London-listed En+, which controls Rusal, the biggest aluminium producer outside China.

While the involvement in the plan of VTB – a bank that is itself under US sanctions — may raise questions in Washington, people familiar with the proposal say it would only hold the En+ shares briefly until sanctions are lifted.

At that point it would sell them into the market to cover loans it has made to Mr Deripaska, which he has struggled to service and repay since he was sanctioned in April. During the brief period VTB controls the shares, their voting rights would also be controlled by two US citizens appointed by En+.

“This would be a really successful outcome for the US,” said one person with knowledge of the proposal. “They have given Deripaska a bloody nose and ended his control of the company.”

Russia’s second-largest lender, state-controlled VTB is run by Andrei Kostin, who is also under US sanctions for his alleged links to Vladimir Putin. VTB has been a key creditor to Mr Deripaska’s empire but said in May that it had ceased lending to the oligarch.

The April sanctions, which targeted 24 Russian oligarchs, including Mr Deripaska, and political officials, were designed to punish Moscow for alleged interference in the 2016 US presidential election.

Almost overnight, Rusal was cut off from global commodity markets and the western banking system, creating chaos in manufacturing supply chains from Ireland to Detroit.

While the US has since allowed Rusal to continue trading, the sanctions are set to tighten again from October, essentially giving En+ two months to find a solution that is acceptable to the US Treasury.

To head off any criticism of the proposal, which has been put together by En+ chairman Greg Barker, a UK peer, Mr Deripaska has made several other commitments.

In addition, any dividends the billionaire receives from his remaining shares will also be placed into an escrow account. The money will not be released until the oligarch himself is removed from the US sanctions list.

Mr Deripaska has also agreed to a “legally binding” undertaking not to vote against En+’s independent directors, the people said.

The billionaire businessman has already resigned as an En+ director and all of the directors he appointed to the board of Rusal, including its chief executive, have stepped down.

If the sanctions are lifted, En+ would revive a share swap deal with Glencore, the Swiss miner and commodity trader, that would help dilute Mr Deripaska’s stake to below the 45 per cent level.

“VTB Bank welcomes any solution to recuse En+ from US sanctions and is ready to participate in the possible plan approved by Ofac,” VTB’s press office said in a statement.

EN+ and Glencore declined to comment and a spokesperson for Mr Deripaska did not respond to a request for comment.

En+ is pushing hard for an agreement to be reached within weeks as it fears for the long-term future of Rusal if it is not able to renew contracts with its key customers and with the October deadline looming.

Results published last week showed Rusal has stockpiled almost half a billion dollars worth of aluminium in the first half of the year as it grappled with the fallout from the sanctions.

Steven Mnuchin, US Treasury secretary, has said that Washington’s objective is not to put Rusal or En+ out of business and he was open to finding a solution that would end Mr Deripaska’s control of the company.

For its part, En+ has previously warned it might consider a sale to China or nationalisation by Russia if it cannot secure a reprieve from the US. – Copyright The Financial Times Limited 2018.

1 Financial ombudsman warns consumers of attempted scam
2 Berkshire Hathaway profits surge despite $10bn writedown
3 Facebook content moderator lodges High Court action
4 ‘Saudi Arabia is where the opportunities will happen in future’
5 Wirecard was looted before collapse, German prosecutors suspect
6 How to build your staff’s resilience while working remotely
7 Scars from the crash give Irish banks 2.6 billion reasons for Covid caution
8 MSD buys Takeda biologics plant in Dunboyne
9 Chris Johns: Digital equality must be moved up the priority list
10 So you want to invest in the stock market: what will it cost?
Real news has value SUBSCRIBE