Invest NI confirms 500 of its client companies have furloughed close to 30,000 employees 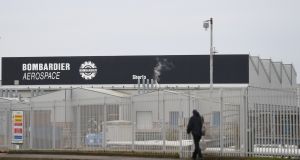 Manufacturing NI, which counts some of Northern Ireland’s biggest companies including Bombardier among its member companies, said about 72 per cent of companies in the North have furloughed more than half of their workforce.

More than four in five manufacturing companies in Northern Ireland had to put some staff on leave, according to the industry body.

And about half of employees have been furloughed at 72 per cent of business, according to Manufacturing NI, which counts some of the North’s biggest companies including Bombardier, Almac and Norbrook among its members.

It says the sector has “largely closed down” due to the coronavirus crisis.

As part of the UK government’s coronavirus job retention scheme, businesses can furlough employees by keeping them on the payroll even if they are not working and then apply for a grant that covers 80 per cent of the individual’s usual monthly wage up to £2,500 (€2,850).

Thousands of companies across all key sectors of the economy have had to temporarily lay staff off because of the impact of Covid-19 on their business, according to the latest figures.

Invest NI, the North’s economic development agency, confirmed that it had received notification from 500 of its client companies that, between them, have sent close to 30,000 employees home.

Manufacturing NI chief executive Stephen Kelly said one in four of the organisation’s members have now completely closed their businesses.

“There is a huge amount of stress and anxiety among manufacturers,” he said. “There are a lot of firms who have closed their doors that may never reopen again.

“Others are trying to keep afloat but it’s like they have been thrown into a really deep pool and no one is throwing them a net or coming to their rescue,” Mr Kelly warned.

He acknowledged the UK government and the NI Executive have taken action to help protect firms and jobs, “but this appears to be only delaying a major economic crash in the weeks ahead”, he warned.

“The biggest issues remains a lack of certainty on the jobs retention scheme. We have to be deeply concerned that we will be unable to restart the sector if we leave the lockdown for too long,” Mr Kelly added.