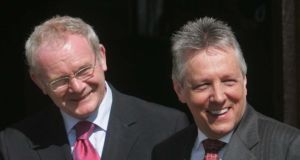 A total of 100 manufacturing jobs have been announced for west Belfast as part of a £40 million investment by Delta Print and Packaging Limited.

The company, which already employs 169 staff at a facility in Kennedy Way, recently took on 31 additional employees in preparation for the expansion.The remaining positions are expected to be filled shortly.

As part of the investment, the firm is to extend its factory and install state-of-the-art machinery and bespoke technology to enable it to increase capacity and efficiency.

One of the North’s leading exporters, Delta Print & Packaging is estimated to generate annual wages and salaries of £8million a year to the local economy. Its customers include McDonald’s, KFC, Greiner Packaging and Nokia, and some 95 per cent of its sales are outside Northern Ireland notably to France, Benelux, Germany and Scandinavia.

“We are making this major investment in response to opportunities to grow sales across a number of existing customer accounts, in particular with McDonald’s, as well as acquiring new accounts,” said Terry Cross, Delta’s chairman and joint managing director.