John FitzGerald: Carbon tax must be seen to be fair 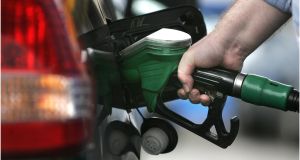 “Carbon taxes will discourage future developments that involve lengthy commutes by car. However, there is a challenge of how best to support those already caught in this situation.” Photograph: Dara Mac Dónaill

If we want to ensure the cost of fuel reflects its impact on the planet through raising carbon tax, there needs to be public acceptance that this is being done fairly. We have seen in the past how policies that had a strong economic and environmental logic, such as water charges, have come a cropper because they were perceived to be unfair.

And in recent weeks, we saw how the French government was forced to postpone a substantial increase in their carbon tax, in the face of mass protests and perceived unfairness.

My training as an economist – and as a former official of the Department of Finance – tells me that tying the revenue from a particular tax to a specific use doesn’t make much economic sense. However, in the case of the carbon tax, it may be necessary to do just that to gain public acceptability.

If the revenue raised from carbon tax is explicitly linked to corresponding assistance to social welfare recipients, easing of other non-carbon taxes, or specific environmental expenditures, it is much more likely to succeed. In particular, it is essential to mitigate the effects on those on lowest incomes.

The implementation of policies to tackle climate change cannot be subcontracted to experts. It is one of the key tasks and duties of politicians, who should base their decisions on good research and good political instincts.

Good intentions on climate change go only so far; without a signal in the market, businesses and individuals quickly forget the need to change.

Successive pieces of ESRI research, conducted since 1992, have shown that a carbon tax is the most cost-effective way to tackle global warming. The main reason is that higher prices for polluting fuels show investors that climate-friendly investments will bring a bigger return than any alternatives. If we know prices for fossil fuels will rise, it makes economic sense to insulate commercial and public buildings, and retrofit our homes.

The prospect of a rising price for emitting greenhouse gases is incentivising the development of the technologies that will allow us to halt climate change, while preserving our high standard of living. For example, this is driving the rapid development of better electric cars, which will replace today’s petrol and diesel models.

Many ESRI studies have shown that higher fuel prices could potentially hit low-income families hardest, as they spend a higher share of their income on home heating. Sue Scott’s 1992 ESRI study suggested that about a third of the revenue from a carbon tax should be recycled into raising welfare payments, to counteract this effect.

Research shows that if the revenue from a carbon tax was used to reduce taxes on income there would be higher employment and increased output, as well as lower emissions. However, if spent on tax cuts alone, this would still leave most of those on low incomes worse off.

Environmentalist Richard Douthwaite proposed an alternative option of allocating carbon tax revenues evenly across the population. However, a “carbon tax dividend” of, say, €40 a head might barely be noticed by the best-off families, and not enough to compensate those on lowest incomes for the effect of carbon taxes.

Another option is to tie the revenue from a carbon tax to environmental investment: for example, investment to reduce emissions or preparing for future flooding resulting from climate change.

Ireland, with its dispersed pattern of settlement, has a much higher dependence on private cars than countries with more of their population concentrated in dense cities. Carbon taxes will discourage future developments that involve lengthy commutes by car. However, there is a challenge of how best to support those already caught in this situation.

The difficult task facing the Government and the Oireachtas is to explain to the public why a carbon tax is an essential first step to tackling climate change. An intrinsic part of that will be deciding on a fair use of that tax revenue, how to mitigate the impact on household budgets, and ensuring that the tax and related expenditure are seen as a linked package in the public mind.

While theory suggests that tying tax revenue to a particular purpose is a bad idea, this may be a case where reality should win out against theory to show voters that we are tackling climate change in an equitable manner.

John FitzGerald is chairman of the Climate Change Advisory Council