Multinational paid $60m in corporation tax on profits of $1.4bn 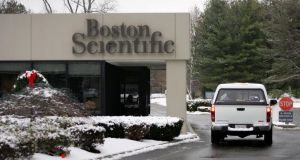 Boston Scientific: the actual tax the group was legally obliged to pay was lower for a number of reasons, including “different tax rates on overseas earnings”, according to the accounts. Photograph: Joe Raedle/Getty Image

An Irish holding company of US medical products group Boston Scientific paid $60 million (€40 million) in corporation tax on profits of $1.4 billion in 2011; an effective tax rate of 4 per cent, according to research carried out by The Irish Times.

A wide range of multinationals have Irish-incorporated subsidiaries that pay little or no tax on large sums going through their accounts because they are not resident here for tax purposes.

In many cases the multinationals also have substantial operations here under the control of fellow Irish subsidiaries, the profits of which are subject to Irish tax, with the links between the two forming part of an increasingly popular global tax structure called the “double Irish”. The net effect of the structure is that multinationals can route tax-free profits through Ireland to offshore havens paying only a small amount of tax here.

An Irish holding company that heads a group of Boston Scientific operations around the globe, including in Ireland, notes that if Irish corporation tax of 12.5 per cent was levied on its profits, it would have to pay $177 million in Irish tax. However, the actual tax the group was legally obliged to pay was lower for a number of reasons, including “different tax rates on overseas earnings”, according to the accounts.


Other multinationals
Similar structures are in place at other Irish-incorporated multinational subsidiaries, including a subsidiary of US software company Novell, which paid no tax on profits of $315.6 million in the 16 months to March 2012.

US drugs firm Abbott Laboratories paid no tax in 2011 on profits of €2.9 billion booked by Irish subsidiaries.

BMC Software Europe paid corporation tax of $92,580 on profits of $144 million in 2010 in Ireland and Microsoft was able to cut its tax bill by €2.4 billion using Irish subsidiaries.

The use by multinationals of Irish firms to reduce their tax liability received extensive global publicity last week when Apple confirmed that it paid a rate of 2 per cent on tens of billions of dollars of global income held by its Irish companies that, under Irish tax law, did not have tax residence anywhere.


Irish rebuttal
Minister of State for European Affairs Lucinda Creighton travelled to Washington yesterday to rebut the assertion that Ireland was a tax haven for US multinationals.

The Minister said that Ireland had a statutory corporate tax rate that was “not negotiable” and that the Irish authorities “don’t cut special deals for any company”.

She defended Ireland’s reputation in response to the Senate hearing at meetings with senior administration and Washington figures, including acting US trade representative Miriam Sapiro.

“There is no doubt that some companies are taking advantage of the global legal and tax arrangements in a variety of jurisdictions,” she said.

The focus of the hearing was not on Ireland but on the “extremely high corporate tax rate” in the US and that is not something the Coalition is going to get involved in, she said.