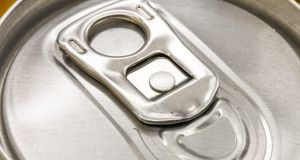 Ardagh, which traces its roots back to the long-shuttered Irish Glass Bottle factory in Ringsend in Dublin, entered the drink cans business in 2016.

Ardagh Group, the glass and metal packaging group led by Dubliner Paul Coulson, confirmed on Tuesday that it plans to secure a separate US stock listing of its prized beverage cans unit in a deal that values the business at $8.5 billion (€7 billion).

The move will capture how equity markets are attaching high valuations to pure drink cans businesses. It may ultimately pave the way for the delisting of the wider Ardagh Group, which floated in New York four years ago.

The planned listing of the fast-growing drink cans business will be by way of a merger with a so-called blank-cheque company, called Gores Holdings V, which raised $525 million in an initial public offering (IPO) last August to do deals. The resulting company, which will be called Ardagh Metal Packaging (AMP), will go on to raise a further $600 million from equity investors and $2.65 billion in debt.

Ardagh Group plans to retain an 80 per cent stake in AMP.

The estimated $8.5 billion enterprise value of the cans business, including debt, equates to 10.5 times its forecast earnings before interest, tax, depreciation and amortisation (ebitda) for 2022.

By comparison, the Ardagh Group, where the glass containers business currently makes up more than half of total earnings, has been trading recently at eight times company forecasts for this year.

The group is currently in the middle of an investment programme aimed at doubling the beverage cans unit’s ebitda to $1.1 billion by 2024, amid rising demand internationally for the likes of canned energy drinks, flavoured beverages and craft beer. Both metal and glass packaging businesses are benefitting from an ongoing shift away from plastic packaging.

Ardagh Group will receive a cash payment of up $3.4 billion as a result of the tie-up with Gores Holdings V and retain an 80 per cent stake in AMP, the resulting company.

Some $2 billion of this will be used to pay down the group’s gross debt of almost $7 billion, with the remainder for use for “general corporate purposes and shareholder distributions”, according to the company.

At the top of Ardagh’s complicated corporate structure is a holding company that holds a 92 per cent stake in Ardagh Group, which floated in New York in 2017. Shareholders in the holding company include Mr Coulson and hundreds of small investors who remained on board when Ardagh Glass, as the company was then known, was taken off the Dublin stock market in 2003.

Ardagh Group intends to offers holders of its 8 per cent of tradable stock a chance to swap their holdings for a direct stake in the AMP unit. This may ultimately lead to Ardagh Group being delisted, according to Mr Coulson.

Ardagh, which traces its roots back to the long-shuttered Irish Glass Bottle factory in Ringsend in Dublin, entered the drink cans business in 2016 through the $3.4 billion purchase of assets from US packaging group Ball and UK rival Rexam as they offloaded plants to appease competition authorities in completing their own merger.

Ardagh Group spun its and food and specialty cans business into a joint venture, called Trivium Packaging, in late 2019. It retains a 42 per cent interest in that operation, with the venture controlled by the Ontario Teachers’ Pension Plan Board.

“Ardagh Metal Packaging is benefitting from long-term megatrends, including sustainability and changing consumer preferences,” said Mr Coulson. “The business has grown significantly since our acquisition of the metal beverage packaging business in 2016 and we have a clear roadmap that we believe will lead us to more than double adjusted ebitda by 2024, as we invest in support of our customers’ growth.”