Alstom agrees to buy Bombardier train unit for up to €6.2bn 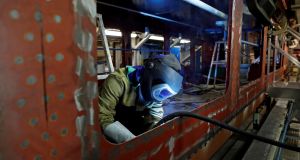 Combining with Bombardier Transportation would make Alstom the clear No 2 in rail equipment and help it counter the industry leader, China’s CRRC. Photograph: Benoit Tessier/File Photo/Reuters

French train maker Alstom agreed to buy the rail unit of Bombardier for as much as €6.2 billion to almost double in size, as the Canadian firm offloads assets following a costly expansion in aerospace.

Alstom will pay as little as €5.8 billion in the cash-and-stock transaction outlined in a memorandum of understanding, according to a statement yesterday. The acquisition is likely to add to earnings per share within two years and generate as much as €400 million in annual savings for Alstom within five years.

Combining with Bombardier Transportation would make Alstom the clear No 2 in rail equipment and help it counter the industry leader, China’s CRRC, which is increasingly targeting global sales.

Alstom is making a second attempt to bulk up, after a plan to merge with the rail unit of Germany’s Siemens was blocked last year by the European Union on antitrust considerations.

Canadian pension fund Caisse de Depot et Placement du Quebec will become Alstom’s biggest shareholder with an 18 per cent stake, after reinvesting its €2 billion holding in Bombardier Transportation and topping it up by €700 million.

Alstom shares advanced 3.5 per cent to €50.30 earlier yesterday in Paris, after both companies confirmed the talks.

The merged rail business would have annual sales of more than €15 billion, according to German consultancy SCI Verkehr, still well behind CRRC but comfortably ahead of Siemens and Japanese bullet train maker Hitachi Ltd.

Bombardier has been offloading assets to pay down debt following a costly expansion of its commercial aviation business.

Bombardier announced last Thursday that it will exit a venture with Airbus that builds the A220 jetliner to preserve cash.

French finance minister Bruno Le Maire will discuss the plan with EU Competition Commissioner Margrethe Vestager today, he said in a statement. The companies have discussed potential remedies to address antitrust concerns, people familiar with the matter have said. – Bloomberg