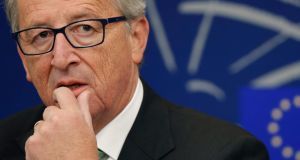 President of the European Commission, former Luxembourg Prime Minister Jean Claude Juncker, has admitted he has been politically damaged by the disclosures.

The French whistle-blower at the origin of the LuxLeaks scandal says he acted out of conviction and that other employees of the “big four” accountancy firms also contributed to revelations on the widespread practice of fiscal optimisation in Luxembourg.

“From the beginning, I acted out of conviction, for my ideas, not to appear in the media,” Antoine Deltour (28) a former employee of PricewaterhouseCoopers, told Liberation newspaper.

On November 6th, a consortium of newspapers published a list of tax agreements between Luxemburg and multinational corporations. A second batch of documents were published in early December.

Mr Deltour completed an internship at PWC Luxembourg as part of his French business school training, and was awarded a permanent contract in September 2008. He resigned two years later. “I progressively discovered the reality of the system… the massive practice of fiscal optimisation,” he said. “I didn’t want to contribute to that.”

Before leaving a job, Mr Deltour said, “one obviously wants to capitalise on his professional experience.” He copied training documents at PWC, and happened on the tax ruling files in his trawl of the firm’s database. “Without any particular plan, I copied them because I was dismayed by their content,” he said.

The PWC suit alludes to a violation of professional secrecy and a digital break-in. Mr Deltour says he did not breach any digital security mechanisms. “Perhaps I should not have had access to those files, but it’s not my fault.”

Mr Deltour approached NGOs with information he gleaned from 28,000 pages of computer files, with no results. In 2012, he gave a copy of the tax rulings to a French journalist. Two years later, they were posted in entirety on the website of the International Consortium of Investigative Journalists.

LuxLeaks 1 (published on November 6th) included PWC documents drawn up after he left the firm, Mr Deltour notes. “So I am not alone.” Luxleaks 2 (published in December) includes files from Deloitte, KPMG and Ernst & Young, the other members of the “big four,” he notes.

Mr Deltour says it is unfair that Luxembourg and PWC should be the only country and the only auditors subjected to scrutiny. “These practices are systematic,” he says. “I don’t like the term ‘fiscal optimisation’ because it’s a question of aggressive fiscal planning practiced by certain states, of complex strategies practised on an industrial scale by certain firms.”

Regulation will never be able to keep up with financial engineering, Mr Deltour says. The loss of tax revenue is particularly harmful in an economic crisis. His revelations had unhoped for consequences, he adds: “At last, there’s a question of harmonising tax bases in Europe.”

At present, tax optimisation is “legal but increasingly considered unethical,” Mr Deltour says. “My action goes in the direction of history, initiated by other whistleblowers or NGOs. I never sought reward. With their mentality, PWC can’t understand that I wasn’t trying to get anything out of it.”

The Washington DC-based ICIJ said it did not comment on sources but believed whistleblowers should be protected, not prosecuted.

“Protection of whistleblowers and sources is as important to society as the freedom of the press,” it said in a statement. “Any prosecution against journalists or journalists’ sources has a dangerous chilling effect on the pivotal role these brave individuals play in ensuring the powerful are held accountable.”

It said the Luxembourg Leaks investigation was an important piece of journalism that raised critical questions about tax policy and practices around the world at a time of economic struggle. Previously secret information that affects members of the public was made available for public scrutiny for the first time. The files revealed aggressive tax avoidance strategies that damage national treasuries and benefit large corporations at the expense of taxpayers.

“Investigations like this rely on concerned citizens who wish to see a more transparent society and would not be possible if these citizens fear prosecution and persecution for their part in uncovering injustice, corruption or wrongdoing.”