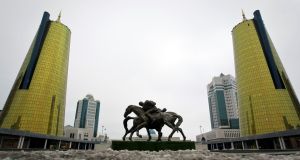 A sculpture in front of the buildings of sovereign wealth fund Samruk-Kazyna in Astana, Kazakhstan. Photograph: Reuters/Shamil Zhumatov

The largest and richest country in Central Asia, Kazakhstan is opening an embassy in Ireland to expand trade between the two countries, learn how to attract multinationals and build an International Financial Services Centre (IFSC) like that in Dublin.

Rustam Tazhenov, who will represent Kazakhstan in Ireland as charge d’affairs, says the embassy will open early in the new year, and is likely to be located “somewhere close to Fitzwilliam Square” in Dublin 2.

“The main reason we are opening the embassy in Dublin is to expand economic relationships between Ireland and Kazakhstan in various sectors,” says Mr Tazhenov. “In compliance with Irish protocol, some official paperwork has to be done before we could officially announce the opening of the Kazakh embassy in Dublin. Nevertheless, the ceremony of presenting credentials to the President of Ireland by the Kazakh ambassador is scheduled for the beginning of next year.”

The world’s largest land-locked country, Kazakhstan is about 10 times the size of France and is bordered by Russia, China, Uzbekistan, Kyrgyzstan and Turkmenistan. The former Soviet state wants to lure foreign investors and capital to fund an ambitious privatisation programme, and transform its capital, Astana, into a regional financial hub.

Black gold has transformed the fortunes of the country, which has a population of about 18 million. Billions of dollars are pouring into its exchequer from Caspian oil and gas projects, such as Kashagan – considered to be the largest oilfield find in the past 30 years.

President Nursultan Nazarbayev is keen to exploit the country’s geographic location by joining China’s $480 billion “Belt and Road” programme linking Asia with Europe and north Africa. The ambitious transport and infrastructure project, announced by China’s leader Xi Jinping in Kazakhstan in 2013, seeks to re-establish the concept of the historical Silk Road route.

Kazakhstan was previously represented in Ireland by honorary consul Sarah Kent, chief executive of Irish engineering group Kentech, which has extensive operations across the former Soviet country and about 3,000 employees worldwide.

Kent, who was replaced as consul by Kildare auctioneer Arthur French in January this year, says Kazakhstan is keen to learn from Ireland’s success in attracting large multinationals.

“They are seeing an increased level of opportunity to work between the two countries, including learning from Ireland on setting up as a strong base for international companies,” says Kent. “Kazakhstan is working on positioning itself as the powerhouse of Central Asia, and I believe they are looking to maximise learnings from other parts of the world in order to achieve this.”

The Kazakh government wants to wean itself off its dependency on commodities by developing Astana into Central Asia’s version of Dubai. The capital this year hosted Expo 2017, a world fair designed to showcase each country’s strengths and vision for the future.

With the Expo having wrapped up in September, the site will be used for the Astana International Financial Centre, which will be home to a regional stock exchange. The government pledges that companies operating from there will be subject to rules based on English common law and enforced by independent courts.

In October, President Nazarbayev (77) issued a decree switching the country’s official alphabet from Cyrillic to Latin in a bold move seen as underlining the country’s independence and modernity. Although Kazakh has been the state language since Kazakhstan became independent in 1991, Russian is more widespread, with about 85 per cent of people claiming fluency.

The country is more open than many of its neighbours, but President Nazarbayev tolerates little dissent and has clamped down severely on media and civic freedoms. He is the longest serving ruler in the post-Soviet space, re-elected in 2015 with 98 per cent of the vote.

The capital was only moved by President Nazarbayev from Almaty, which is on the border with China, in 1997. Emerging from a windswept steppe, Astana boasts a surreal skyline featuring glitzy and glittering buildings designed by famous architects like Norman Foster and Kisho Kurokawa.

Cork-based Kentech has been operating in Kazakhstan since 1998. It has worked in all the major oil and gas facilities such as Kashagan, whose western investors include Royal Dutch Shell, Total and Eni.

“There are a handful of companies we are aware of doing any kind of business there but it’s very patchy,” says Gerard McCarthy, head of Enterprise Ireland’s Moscow office, which covers the Central Asia region. “Part of the reason is the distance.”

Property developer Paddy McKillen is one of the few Irish high-rollers familiar with the country. The Belfast-born businessman is reported to own a stud farm there, though he is not believed to have dabbled in any commercial real estate.

International Development Ireland (IDI), a project management company, has been trying to crack the Kazakh market since 2015, when commodity prices crashed and pushed economic growth to 1 per cent from 6 per cent previously.

“The economic crisis did affect the business environment over the last two years. However, the government has remained resolute in relation to its priority toward attracting foreign direct investment, and continues to be focused on policies that make doing business in Kazakhstan easier for investors,” says Dublin-based Greg Hogan, a commercial director at IDI.

Enterprise Ireland’s McCarthy says one of the obstacles to doing business, other than the lack of a proper physical presence in the country, has been the absence of a double taxation agreement. “That is very close to signature, and should be over the line by the end of the year,” he says.

An agreement between the Revenue Commissioners and Kazakhstan was signed in April this year, and is expected to be ratified soon.

So far Kazakh companies trading and operating in Ireland are few and far between. Air Astana, Kazakhstan’s national carrier and a leading airline in the Central Asian region, has two Irish executives among its top ranks – senior vice-president Anthony Regan, a former Irish Air Corps pilot, and Margaret Phelan, vice-president of inflight services

The airline, which is scheduled to be privatised within the next six months, also trains its pilots at the Atlantic Flight Training Academy near Cork Airport.

Despite Taoiseach Leo Varadkar’s aim to double Ireland’s overseas diplomatic presence, there are currently no plans to establish an Irish Embassy or Consulate in Kazakhstan. Any assistance necessary is provided by the Embassy in Moscow, which is located about 3,000km away.

Neil Collins, a professor at the Nazarbayev University in Astana, believes an Irish Embassy would greatly assist Irish business interests in a newly important economic region.

Collins, who arrived in Astana in 2013 after 12 years as head of University College Cork’s department of government, teaches corruption and Chinese politics to local students. The university was established in 2010 by President Nazarbayev with the aim of becoming the country’s flagship academic institution and global-level research university.

“We don’t linger on Kazakh corruption unless the students bring up examples,” says Collins. “It’s more about the academic literature.”

Over the past year Kazakhstan jumped to 35th from 51st in the World Bank’s ease-of-doing-business rankings, with notable improvements in how easy it is to get construction permits or electricity. However, it still lags badly in corruption, and ranks alongside Russia in 131st position out of 176 countries in Transparency International’s corruption index.

Bureaucracy also remains a big problem for companies trying to break into the market. “It’s basically the Soviet Union in terms of bureaucracy,” says Collins. “Everything has to be signed in three languages and only in blue marker, which is ludicrous.”

Collins, who works in English and doesn’t speak Kazakh or Russian, intends to stay for a few more years. As part of his contract the university pays for his wife to visit and his children have also been to Astana.

He says Ireland could exploit its expertise in agriculture, while Aer Rianta’s experience of setting up duty-free operations could be applied along the new Silk Road route.

“The population is quite small, so getting Kerrygold into Bejing is much more important than Almaty,” says Collins. “From the point of investment, they are hungry for agricultural investment, and I have seen big delegations from North Dakota in the US and Manitoba in Canada passing through.”

When boxer Katie Taylor fought in Astana in May last year, Collins was surprised to discover 20 Irish people – mostly schoolteachers at local English-speaking schools – at the stadium.

“There’s not a big Irish community in Kazakhstan but there is a huge potential for Irish companies as the country opens up. Having boots on the ground would certainly help.

“This place is going to be much more important with the new Silk Route initiative. We can decide to be part of it or not. We need to have someone here looking at these opportunities, communicating back home and taking it seriously.”