JP McManus in legal bid to recover $5.2m from US taxman 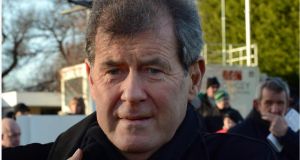 Businessman JP McManus has taken a legal action in the United States to try to recover $5.2 million (€4.7 million) in taxes which he claims should not have been withheld from $17.4 million in US gambling winnings in 2012.

Mr McManus filed the proceedings with the US Court of Federal Claims in Washington through lawyers in Texas, claiming the money from his winnings had been “erroneously withheld” by a withholding agent to cover any potential US federal income tax liability.

Court records show the Limerick businessman has tried to recover the money from the Internal Revenue Service (IRS), the US tax authority.

Mr McManus, well known for his life-time interest in bloodstock, racing and gambling, maintains that the money is exempt from American taxes under the 1997 double-taxation agreement between the US and Ireland.

In a filing submitted with the Washington court on Monday, Mr McManus’s lawyers say that he is a citizen and resident of Ireland and that in 2012 he earned income outside of Ireland that was “generally not subject to Ireland’s provincial geographic income tax structure”.

His Houston-based lawyers told the court he filed a tax return with the IRS for the 2012 tax year outlining the $17.4 million in US gambling winnings, the $5.2 million withheld in tax on those winnings and the reasons why he was entitled for that entire amount to be refunded.

Mr McManus was selected for an audit in May 2014 and in August that year his claim for the $5.2 million refund was approved by the IRS.

In September 2014 his claim for the refund was remanded to another department within the IRS for an additional review. Since then, the IRS has taken no further action to repay Mr McManus the refund.

Mr McManus also told the court in the filing this week that he paid the “domicile levy” of €200,000 to the Irish Revenue Commissioners for 2012, explaining that the levy is a flat tax charged on an individual who is domiciled in Ireland and whose worldwide income exceeds €1 million and who has Irish assets of more than €5 million.

The levy was introduced in 2009 by the then minister for finance, the late Brian Lenihan, on wealthy tax exiles. Mr McManus was one of just 14 people who paid the levy in the 2012 tax year.

Are you a Monica, Joey or Chandler when it comes to your data privacy? 06:00
Money problems for Fine Gael as think tank shoots down tax proposals 05:42
On your bike: Dropbox backs Dublin Cycling Campaign 05:41
LogoGrab unveils new AI ad-detection tool 05:35
Conference for software geeks returning to Dublin 05:30

1 Are there annual limits on inheritances or gifts to a child?
2 Ireland has EU’s most progressive tax system, study finds
3 Who are Ireland’s 17 billionaires?
4 Fallon & Byrne gets permission for extension in Exchequer Street
5 My father in a nursing home wants to gift me his house
6 Are you a Monica, Joey or Chandler when it comes to your data privacy?
7 Aunt has bequeathed a house intended for my son to me
8 Eason puts Blanchardstown store on market at €16m
9 Davos Diary: UCD prof goes batty, Ivanka hits town and Prince Charles takes the stage
10 Money problems for Fine Gael as think tank shoots down tax proposals
Real news has value SUBSCRIBE