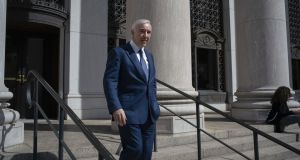 Bankrupt developer Seán Dunne’s lawyer has asked the judge in his US civil trial Thursday to order a new trial or reduce the €18.1 million judgment a jury ordered his ex-wife Gayle Killilea to pay in June.

Christopher Hoffman has details of the development, which comes in the wake of news that the former couple have divorced. He also reports on documentsthat seem to point to substantial legal disagreement between the two.

Permanent TSB chief executive Jeremy Masding will deliver a restructuring plan that could involve cutting up to 360 jobs before he steps down next year, writes Joe Brennan. The initiative could also see about a fifth of the bank’s 77 branches close.

Joe takes a closer look at the state of the wider financial sector with this week’s in-depth Agenda feature, asking what lies ahead for the Irish banks as low interest rates and Brexit bite?

John FitzGerald also has Brexit on his mind, specifically the relentless “downward spiral” it seems to be following. It’s no wonder, he concludes, that the DUP are cross.

And still in property, Pat Crean’s Marlet has agreed the forward sale of 56 apartments in Dublin’s docklands for €45 million. Ronald Quinlan reports.

Dublin Airport owner DAA may challenge a ruling by regulators to cut passenger charges by up to 18 per cent to an average of €7.87 from next year. The regulator that sets the fees predicted the move would save airlines and passengers €320 million over five years. Barry O’Halloran has the details.

In his Caveat column, Mark Paul considers the state of the mood at INM since its takeover by Mediahuis. It sounds as if staff might be shaping up for a battle, he suggests.

This week’s Business Interview features He Xiangdong, China’s ambassador to Ireland, who tells Colm Keena about the billions traded between China and the Republic every year, as well as China’s views on international trade tensions. He also explains his belief that the facilities in which international observers say 10 per cent of the country’s 10 million-strong Uighur population are being held are not camps, but rather “educational and vocational training centres”.

And in our Work section, Olive Keogh looks at the continuing travails of women in the workplace, notably the gender pay gaps and bruising work practices still faced by many.